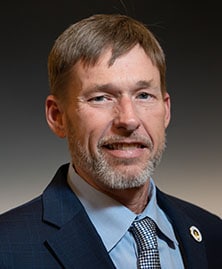 John D. Whitaker III was born Nov. 16, 1972, and began his railroad career in 1997 with CSX Transportation as a conductor. He was promoted to engineer in 2002. A member of SMART Transportation Division Local 1106 in Rocky Mount, N.C., he was elected to the position of local chairperson for engineers in 2002.

Whitaker and his wife, Melissa, reside in Jacksonville, Fla., with their three sons, Chase, Russell and Nicholas.