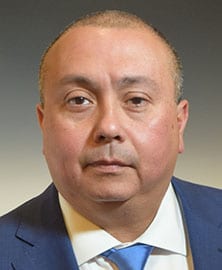 Joe M. Lopez, a member of SMART TD Local 1532 in Kansas City, Kansas, began his railroading career with the Santa Fe Railway in July 1993 as a switchman and then was promoted to engineer in 1994.

Lopez was elected vice chairperson for the Association of General Chairpersons’ District 1, is a certified remote control operator and has served as a new hire training coordinator. His home base is Argentine Yard in Kansas City.

He married his wife, Anne, two months after starting on the Santa Fe Railroad. They have four children — Ethan, Allison, Josh and Emily.