Jamie C. Modesitt, a member of Local 298 at Garrett, Indiana, was born July 1, 1974. He attended Ball State University in Muncie, Indiana, before beginning his railroad career with CSX Transportation on June 12, 2000. He holds the craft of conductor and engineer. 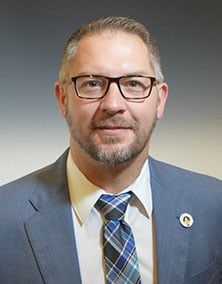 Modesitt served as delegate for Local 298 and attended UTU Conventions in 2007, 2011 and the First SMART TD and General Conventions in 2014. He was selected by the Board of Directors to serve as the chairperson of the 2014 SMART TD Constitution Committee. In addition, Modesitt was appointed an alternate member to the TD Executive Board by the Board of Directors on April 4, 2017, and was elevated to the Executive Board in January 2018.

Modesitt is considered an expert when it comes to Railway Labor Act (RLA) arbitration with experience in well over a thousand cases consisting of discipline cases and agreement rules and has presented local chairperson workshops at the SMART TD Regional Meetings since 2015.

Modesitt was elected to the position of vice president by acclamation at the Second SMART Transportation Division Convention, Aug. 11, 2019.

He and his wife, Janelle, reside in Jacksonville, Florida.