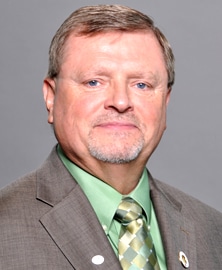 Delbert Strunk, born May 8, 1950, began his railroad career in 1973 as a brakeman on the Cleveland Division of the Norfolk & Western Railway (former Nickel Plate Road; now part of Norfolk Southern Railway.) He was promoted to conductor in 1977.

Strunk has been appointed to the last three UTU national negotiating committees, as well as appointed to the National Wage and Rules Panel. He served as chairperson of the 2007 UTU Constitution Committee. He is also a member of the UTU board of directors.

Strunk also served as chairperson of the 2007 UTU Constitution Committee.