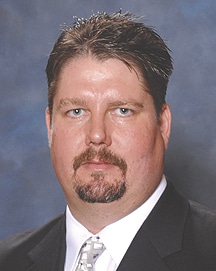 A member of Local 1081 in Glendale, Ariz., Young became interested in unionism and became trustee for his local in 1999. He became local chairperson the same year. In 2003 he was elected secretary of BNSF Railway General Committee GO 017; he was re-elected to the post in 2007.

Young and his wife, Julie, reside in Ontario, Calif.