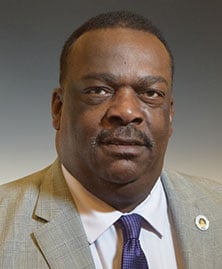 After the service he moved to Clifton, N.J. He has been employed at Community Coach since June 1993.

Studivant serves his union as general chairperson, a position he has held since 2001, and delegate.

He also serves as chairperson of the District 3 general chairpersons’ committee.

At the Second SMART TD Convention on August 11, 2019, he was elected vice president – bus by acclamation.

Studivant is married to Michelle, and the couple has three children and two grandchildren.