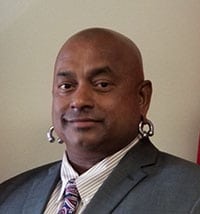 Reddy Adhi was born in the Fiji Islands in 1960. He grew up in the sugar cane fields there where he said his grandfather, a native of India, was forced to work.

Adhi began a brief tour of service in the Fijian Army in 1979 before later working as a prison guard. After emigrating to the United States, he held a variety of odd jobs before becoming employed as a motor coach operator with Big Blue Bus in Santa Monica, Calif. He joined the former United Transportation Union at that time.

Adhi currently resides in Bakersfield, Calif., with his wife and two children.