SUNA was youngest at 74 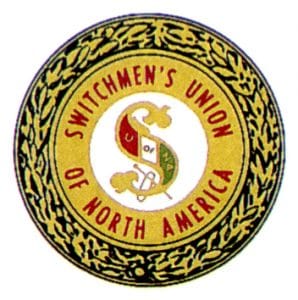 In the year 1870, switchmen employed on the railroads around the city of Chicago worked 12 hours a day every day in the month for $50. Realizing their helplessness in bargaining with their railroad employers on an individual basis, switchmen began to band together in an organization of their own in the Chicago yards.

In August 1877 these Chicago switchmen formed a Switchmen’s Association.

As the need for a national organization became evident, a large number of representative switchmen met in Chicago in February 1886, and formed the Switchmen’s Mutual Aid Association of the United States of America.

The lockout on the Chicago North Western Railroad, and the disastrous strike of 1888 on the Chicago, Burlington and Quincy Railroad, brought about an untimely death of the Switchmen’s Mutual Aid Association in July 1894.

On October 23, 1894, a meeting of various locals of switchmen in Kansas City led to the establishment of the Switchmen’s Union of North America. In October 1968, SUNA celebrated its 74th year of serving the interest of railroad switchmen and their families.

The Switchmen’s Union affiliated with the DIM American Federation of Labor on July 12, 1906, and for almost 50 years was the only railroad operating union affiliated with the AFL. SUNA was a charter member of the Railway Labor Executives’ Association, having joined this group in 1926. It is one of the founders and owners of “Labor” newspaper as well as the Union Labor Life Insurance Company.

SUNA has also been affiliated with the Canadian Labor Congress since the year 1935. Officers of the union throughout its long history have actively participated in every concerted effort by labor to advance the welfare of the workers of this country. The Switchmen’s Union is justly proud of the historical role it has played in developing a better America for all to live and work in.

Historically, the Switchmen’s Union has taken pride in the fact that it is organized along craft lines to improve the wages and working conditions of switchmen, that it has a long history of militant action against the excesses of railroad management and a tradition of joining with others to protect and advance the economic and political rights of all workers and, thirdly, that it is a democratic organization in which each member has a voice in the policies and operations of his union.

SUNA’s watchword for more than 70 years was, “The injury of one is the concern of all.” It remains today as the “warp and woof” of the Switchmen’s Union.