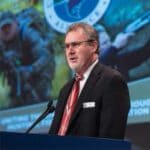 When Union Sportsmen’s Alliance Executive Director and CEO Fred Myers asked attendees at the first SMART Convention how many of them hunted, fished, or spent time outdoors with their families, nearly 100 percent raised their hands.

That was a fairly decent sign that Myers would be well received by the SMART delegation and that he and his audience have more than one thing in common. That and the fact that SMART is one of 11 International unions that provide financial and promotional support to the USA.

“Thanks to the dedication and foresight of yours and other unions, the 11 million members of these unions have an outdoor organization they can call their own. It’s 100 percent union and it’s your organization,” Myers said.

The mission of the alliance is to educate and organize union members, their families and like-minded individuals who share a passion for hunting, fishing, shooting and the great outdoors. Members volunteer their time and unique trade skills to expand and improve public access to the outdoors, conserve and maintain critical wildlife habitats, restore our nation’s parks and provide mentoring programs that introduce youth to the outdoors.

Myers told SMART members that two television shows produced by the alliance will raise more than $1 million for conservation efforts. Brotherhood Outdoors is a unique television series that showcases the talents and passions of working men and women as they set out on extraordinary hunting and fishing adventures across North America.

“Your union supports that show and the show has featured six of your members over the last few years going on hunting and fishing trips, trips of a lifetime,” Myers said. “Local 36 member Dan Riegler is going on one soon.”

Myers also spoke about USA’s Work Boots on the Ground, a conservation program that utilizes the unique skills of its members for projects that educate future generations of sportsmen, conserve wildlife habitat and pass on our outdoor heritage to future generations.

“It is our boldest effort yet to rebuild, renew and restore the country’s state parks,” he said.

“We connect you at a lifestyle level with your members, not just on who they are, but what they do for a living. We put a white hat on union members. We frequently hear from members that this is the best thing they spend money on, instilling pride and creating good will.”

“Thank you for helping to create the USA, thank you for what you’ve done to make this organization the success it is today.”