MADISON, Wis. — It may be only a temporary restraining order, but the decision of a Wisconsin judge last week to block the state legislature from revoking the collective bargaining rights of public employees reflects the controversial nature of the action and keeps it before ever-increasing citizen wrath.

An appeal to a higher court of the temporary restraining order is expected this week, and Judge Sumi also later could permit the law to be published following a hearing she scheduled to begin March 28.

Additionally, Wisconsin Republicans, who control the legislature, could bring the bill up again for a vote, now that Democratic members — who had fled in an earlier unsuccessful attempt to block the law’s passage — have returned.

“We highly doubt a Dane County judge has the authority to tell the legislature how to carry out its constitutional duty,” said Republican Sen. Scott Fitzgerald and Republican Rep. Jeff Fitzgerald.

The fight is far from over in Wisconsin or elsewhere. 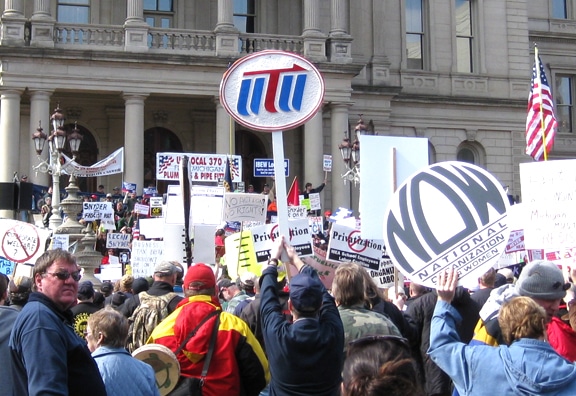 It's not just Wisconsin. UTU members participate in a rally in Lansing, Mich., last week where the legislature there is considering bills whose intent is union busting. Similar rallies are taking place nationwide as union members and non-union members are speaking as one against the assault by right-wing extremists against collective bargaining rights.