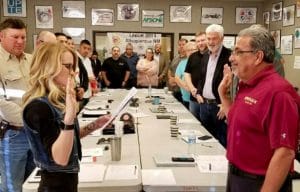 On March 20, the New Mexico Federation of Labor Executive Board unanimously appointed Vince Alvarado to lead the state labor federation as their new President.

Brother Alvarado is the Business Manager and Financial Secretary for SMART Sheet Metal Workers’ Local 49, a position he has held since 2010. He is also a member of the Board of Trustees for the SMART Local 49 Health Plan and Joint Apprenticeship and Training Council. Alvarado is a third-generation sheet metal worker originally from El Paso, Texas and served in various leadership roles on the job and with his union for over two decades.

NMFL Secretary-Treasurer Ashley Long said, “The energy behind our Executive Board’s decision to appoint Vince as our new President was so enthusiastic and positive. There is a strong sense of unity that is growing and expanding across the New Mexico labor movement right now, and Vince is the exact leader we need.”  Brother Alvarado, in accepting the appointment added, “The New Mexico labor movement has become more and more united ever since we joined together to defeat so-called right to work legislation four sessions ago, when we didn’t have the Governor or the House on our side. Our movement has been doing well, but there is always room for improvement. There was a lot of good energy when our Executive Board appointed me to lead the federation and there is a lot of potential to keep making our state better for working people.”