UTU to Congress: ‘Get serious on security’ 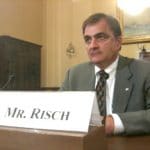 WASHINGTON — America learned a tragic lesson a decade ago when armed terrorists gained entry to the flight decks of multiple commercial airliners. The results of 9/11 will live in infamy.

Inexplicably, neither railroads nor the federal government has moved to require the securing of locomotive cab doors and windows to prevent terrorists – whether foreign or domestic – from taking control of a train and wreaking a new calamity on Americans.

A similar security breach is possible at commercial bus terminals, and with commercial motor coaches, where drivers and passengers are vulnerable to armed attacks and hijackings.

That was the message delivered to the House Subcommittee on Transportation Security and Infrastructure Protection by UTU Alternate National Legislative Director John Risch July 12.

The FBI warned in 2002 that rail facilities are vulnerable to attacks by terrorists; and following the killing of Osama bin Laden, it was revealed he was planning an attack on railroads. Terrorist attacks already have been carried out on passenger trains in Madrid, Spain, and London, England.

Most chilling is a warning from the Chlorine Institute — that a terrorist-induced release of chlorine from a tank car could create a toxic cloud 40 miles long and 10 miles wide that could kill upwards of 100,000 people in an urban area within 30 minutes. In fact, a limited chlorine release from a tank car following a derailment in rural Graniteville, S.C., in 2005 killed nine and forced the evacuation of thousands.

Securing locomotive cabs is also essential for crew safety. In June 2010 in New Orleans, a conductor was shot to death and an engineer wounded in their locomotive cab during an armed robbery. In 1998, a commuter train was hijacked near Philadelphia; the engineer held at gunpoint.

“We believe it should be a requirement that all locomotives be equipped with locks for the doors and windows to prevent unauthorized entry into the operating compartment,” Risch told the subcommittee, which was seeking advice on how to enhance transportation security.

The UTU also recommends that fencing, video surveillance and security personnel be required for bus terminals, and that protective shields be installed on buses to protect drivers from unruly or deranged passengers.

Proper training of rail operating crews and bus drivers to recognize, respond to and report potential terrorist activities is a high priority of the UTU, Risch told the subcommittee.

“We need to adequately train bus, rail and transit workers across America so they are ready in the event of a terrorist threat or attack,” Risch said. “Properly training frontline workers is vital to surface transportation security, and is a cost-effective way to secure and safeguard our bus, rail and transit systems.

“In the event of an incident or attack, our members are the first on the scene — even before police, fire fighters, and emergency medical responders — and what they do in the first few minutes is crucial to minimizing destruction and loss of life,” Risch said.

The UTU already is working in partnership with Amtrak to develop a training program for on-board employees; and on Terminal Railroad Association of St. Louis, the UTU is helping to develop a program to train front-line employees on how to recognize, respond to and report potential terrorist activity. Although the UTU has reached out to other freight railroads for partnerships to develop similar safety training programs, railroads are hamstrung due to a lack of federal funding.

Although the congressionally passed 9/11 Commission Act mandated that all frontline rail, transit and over-the-road bus employees undergo live training exercises, receive training on evacuation procedures and are instructed on crew and passenger communications and coordination, little has been accomplished, and training mandates are long overdue, Risch said.

“This is unacceptable and further delay only perpetuates the existing dangers,” he said. “Security training should not be a one-time, check-the-box exercise. Regularly scheduled follow-up training is critical.”

Risch also recommended that major rail terminals, where chemicals are stored, be fenced and equipped with video surveillance and security personnel; and that outdated FRA window glazing standards be improved, as current standards protect against only small-arms fire such as a .22 caliber bullet.

“Workers must be treated as partners in the battle to protect our vulnerable bus, rail and public transit systems,” Risch said.