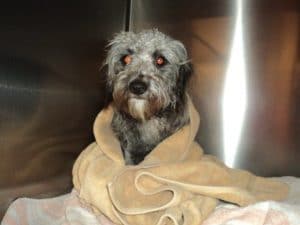 An engineer spotted an old man walking near the railroad tracks and noticed that the man had left something behind. The engineer was able to stop the train in time using his emergency brakes and discovered the pooch still alive. The puppy’s hero remains unidentified.

Union Pacific Special Agent Sal Pina responded to the scene and questioned the perpetrator. It seems the family didn’t want the puppy and didn’t know what to do with him. The 78-year-old man was deemed to be senile and confused, seemingly not realizing what he had done, and no charges were pressed. He was released into the custody of his family with a warning that if the elderly man was ever spotted around the railroad tracks again Pina would file elderly abuse charges.

Pina said that the puppy tied to the tracks was “probably one of the worst things he’d seen,” adding, “I’ve never seen something like this.”

The puppy – which was named Banjo after old traffic signals some of which can still be seen on various railways – was taken to a vet and given a bath.

He was then turned over to Riverside County Animal Services where he has been put up for adoption.

“I would prefer to be someone who can treat him gently and give him the kind of love he needs right now, because he’s been through so much,” said Jo Marie Upegui, a veterinary technician who is caring for Banjo.

Banjo is described as being a very healthy and friendly pup by the vets who took care of him. Riverside County Animal Services is requiring interested adopters to email shelterinfo@rivcocha.org and share why their family would be the best for Banjo.