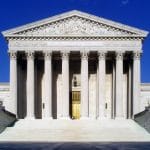 The Supreme Court is set to hear the case Friederichs v. California Teachers Association on January 11. The case could weaken public sector unions by forcing a public sector ‘right to work’ law nationwide.

The court will determine whether public sector unions can continue to collect ‘fair share’ or ‘agency fees’ from non-members who benefit from the collective bargaining agreement negotiated by unions.  This case could overturn the landmark case Abood v. Detroit Board of Education.

The Court has revisited the Abood case six times since its first announcement, most recently in last year’s decision in Harris v. Quinn. Strong majorities on the Court have reaffirmed the Abood ruling—five of those times unanimously—in every single case.

Every member of the current Supreme Court has either authored or joined in at least one of those supporting decisions. Last year, outlined in his writing in Harris, Justice Samuel Alito invited the current challenge by spending half of his lead opinion attacking the original Abood on First Amendment grounds.

Legal experts are divided as to what they expect the result of the case will be.