Atop the committee’s list of goals is creating and sustaining good jobs that working families want and need by strengthening America’s transportation network and improving workplace safety at a time when stagnating wages, a changing economy, and coordinated, sustained attacks on the rights of working people have fueled a new wave of activism among workers. 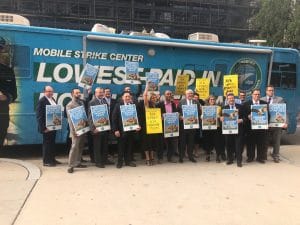 “Transportation workers belong to unions and are organizing today because working people know collective bargaining is the best path to good jobs and a fair economy,” said TTD President Larry I. Willis. “The policies we fight for today and every day are focused on improving quality of life for frontline transportation workers and creating an economy that enables those who work hard to lead dignified lives.”

Senate Democratic Leader Chuck Schumer (D-NY) and Rep. John Katko (R-NY), a member of the House Transportation and Infrastructure Committee, were in attendance at the meeting and participated in the discussion among union leaders.

“The dedicated men and women who power our transportation network and enable our economy to thrive deserve to be treated with dignity and respect, and know they are safe at work, receiving fair pay and benefits,” Schumer said. “Fixing our transportation infrastructure, revitalizing the middle class, and enhancing the rights and working conditions of those who work in the transportation trades should be a priority for Congress.”

“Making sure our transportation system is safe, secure, and a creator of good jobs is one of my top priorities,” Katko said. “I look forward to working with TTD unions and all stakeholders to develop comprehensive, commonsense solutions to our most pressing transportation challenges.”

Taking aim at changes made by Amtrak that threaten the carrier’s long-distance routes and the good jobs those routes provide, Executive Committee members pledged to fight for a national passenger rail system that serves the entire country. They also called on the Trump administration and lawmakers to halt dangerous efforts by the freight carrier Kansas City Southern to move rail operations, brake inspections and jobs to Mexico.

“Strict freight rail regulations exist for a reason,” Willis said. “By seeking to write their own rules and undermine longtime standards, Kansas City Southern is jeopardizing good jobs and safety. Transportation labor will not stand for it.”

Labor leaders also vowed to work with members of Congress to pass legislation designed to mitigate the epidemic of assault facing America’s transit operators. Bipartisan legislation in the House and Senate requiring transit agencies to work with frontline employees to develop risk-reduction plans and implement proven safeguards is a priority for transportation labor leaders.

TTD’s Executive Committee also pledged to fight for regulations that would ensure the temperatures in commercial aircraft cabins remain at healthy, safe levels.