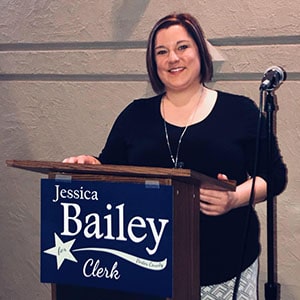 Today marks the start of the 2018 election season in earnest with four states – Indiana, North Carolina, Ohio and West Virginia — holding primary elections, with many other primaries to follow from now until September.

This is the chance for members of SMART Transportation Division to shape where the future of the transportation industry will go by selecting candidates who support issues that are important to us and our union brothers and sisters – things like improved safety in all modes of transportation, two-person train crews and yardmaster protection legislation. But you must get out and vote!

If you want to know the positions your elected officials have taken on these important issues, visit our Legislative Action Center where you can find out your senators’ and representatives’ voting records. You also can make your voice heard by sending them an email via the Action Center. Incumbent politicians attempting to get re-elected are very receptive to what you have to say from now until November. Why? They want your vote! Check the Action Center where you can research and ultimately decide whether that candidate really deserves your support on the basis of his or her record.

For some, it may be too late to register for your state’s primary election – the primary registration deadlines have passed in 12 states thus far, and today, May 8, is the last day that our brothers and sisters in New Mexico can register for their June 5th primary.

But that doesn’t mean it is too late to stay informed. We’ve been sending out reminder emails for the primary registration deadlines and will do the same as the general election registration deadlines approach. If you haven’t received one, it might be because we have an old email address on file. It’s always a good idea to update your information with SMART Transportation Division headquarters online to stay informed.

And finally, if it’s been awhile since you’ve voted or if you have moved, you can always double-check your voter registration status with a website that has been set up at www.smartvote2018.org.

This is an important year for the direction of our country, and as we do on the roads and on the rails of these great United States, SMART Transportation Division will lead the way.

Judge Peter Economus of the U.S. District Court for the Southern District of Ohio ruled Wednesday, June 11 in favor of a motion for summary judgment to permanently maintain the final three days of early voting.

“In-person early voting is restored on the three days immediately preceding all future election days for all eligible voters. Secretary of State Jon Husted shall be responsible for setting business hours for such voting to preserve the right of all Ohio voters to cast his or her vote with said hours to be uniform throughout the state and suitable to the needs of the particular election in question,” Economus said in the decision.

Earlier this year, Husted issued a directive setting uniform statewide early voting hours for the 2014 election that didn’t include any Sundays or the Monday before Election Day.

The court’s action follows a previous decision that restored early voting hours leading up to the 2012 election.

Secretary Husted said he would comply with the court’s ruling and hailed it as a vindication of his effort to impose uniform voting procedures statewide.

“I am pleased that the federal court has affirmed what I have long advocated – that all voters, no matter where they live, should have the same opportunity to vote. Thankfully, uniformity and equality won the day,” Husted said.

Secretary Husted had urged the legislature to pass a law setting uniform early voting hours statewide but got little interest from his Republican colleagues.

“This ruling shows how important these last three days are to ensure equal access to the ballot, and the hours set by Secretary Husted should reflect that,” Ohio Democratic Party Chairman Chris Redfern said in a statement.

“This November and beyond, thousands more will be able to join them,” Schultz said.

The court case stems from a series of legislative actions last session when Republicans passed a far-ranging elections measure that reduced the early in-person voting period.

Meetings are underway across the country to explain our tentative national rail agreement and provide members the opportunity to ask questions. Check with your local officers, general chairperson or state legislative director if you have not been notified of a meeting near you.

A listing of meetings also is provided on the home page at www.utu.org.

A voting package will be mailed by mid-May to members eligible to vote on the national agreement. A notice will be posted at www.utu.org when the packages — with voting instructions, the complete agreement, and questions and answers — are mailed. Voting will be via telephone and conducted by the American Arbitration Association.

In the meantime, information on the agreement is available on the UTU Web page, at www.utu.org, under a special link, “Railroad Contract Negotiations Update.”

Our tentative agreement improves on the pattern settlement, and general committees of adjustment still will be able to gain additional improvements on local issues.

Those of us who suffered through PEB 219 in 1991 recall what happened when we struck the railroads and Congress imposed the PEB recommendations.

Even though the House of Representatives was controlled by Democrats, Congress ended the strike within hours. The legislation forced on us the PEB 219 recommendations, which resulted in two-person crews and elimination of the fireman-helper.

The recommendations of PEB 219 were the final nail in the coffin eliminating brakemen and firemen-helpers — the nails and coffin provided by the carriers and the hammer by the first President Bush in selecting the members of PEB 219.

If we reject this agreement, we can expect that the improvements we gained over the pattern settlement would be dead-on-arrival at a Bush-appointed PEB.

That would mean we would lose the ability to keep the entry-rate issue on the table and correct it through arbitration, lose the higher meal allowance, lose the COLA, and lose a provision unique to our agreement that returns to us any health-care insurance-premium savings should Congress enact public-funding of health-care.

When you receive your May issue of UTU News in mid-May, we call your attention to four items:

Please take note that on the UTU Website, at www.utu.org, under the link for “Meetings,” there is complete registration information for our regional meetings in Denver and Nashville. Those meetings focus on education and interaction among members.

A highlight of this year’s regional meetings will be a presentation by Professor Jim McDonnell on labor history and the role of labor unions in creating a middle-class in America. As Professor McDonnell advises, labor cannot build for the future without fully understanding its past struggles, defeats and victories.

At UTU headquarters in Cleveland, we have been realigning jobs to make member services more efficient and cost effective — and without hurting any of our dedicated employees who are ably and proudly represented by the Office and Professional Employees International Union (OPEIU).

Finally, the 2008 annual sales meeting of the United Transportation Union Insurance Association will be held April 27-29 — the one annual event dedicated to training and educating our field supervisors and assistant field supervisors. It is a forum for the exchange of ideas and experiences related to existing and new UTUIA products and services.