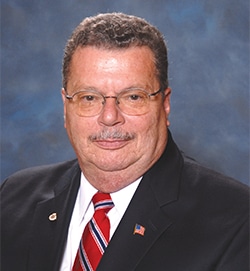 Whitaker’s railroad career began in 1997 when he hired out as a conductor with CSX Transportation. In 2002, he was certified as an engineer. In that same year, Whitaker decided to take a more active role in his local and was elected to the position of local chairperson for engineers for Local 1106 in Rocky Mount, N.C.

After gaining four years of experience as local chairperson, he ran for the office of vice general chairperson for CSX General Committee of Adjustment GO-851 and was elected effective January 2006. Whitaker maintained that position through March 2011, at which time he was elected general chairperson for GO-851. In October 2013, Whitaker was appointed as an alternate to the executive board and was elected at the 2014 convention to another term. In December 2014, he was elevated to alternate vice president. He also serves on the board of the SMART TD Association of General Chairpersons (Dist. 1).

SMART TD welcomes Whitaker to his new position and looks forward to working with him in this capacity.

Wier began his railroad career in 1974 as a trainman for TRRA of St. Louis. He later became an engineer.

He is most well known for his dedication in successfully negotiating more than 50 agreements, a lot of which have been designed to bridge the gap between pre- and post-85 members.

SMART TD thanks Wier for his service to the union and wishes him a long, happy and healthy retirement.

“It has been my privilege and pleasure to serve the membership as an officer of our great Union for almost 36 of my 46 years of railroad service. My sincere thanks to all of the Union members, officers and staff who have supported me along the way,” Lesniewski said. “I will never forget you.”

On Feb. 28, 2011, Lesniewski was elected as second alternate vice president-East by the UTU board of directors and was subsequently elected, overwhelmingly, as a full vice president by delegates at the 2011 UTU Convention and re-elected to the position at the SMART TD convention in 2014. At the 2014 convention, he was also elected “successor president” by the delegates. He also served as general vice president on the General Executive Council of SMART.

“As I step aside, I encourage younger members to get involved in the labor movement to protect their own future as well as the future of their co-workers,” Lesniewski said. “Being a Union representative, in any capacity, is a prodigious source of personal satisfaction if it is undertaken for the correct purpose of making a difference by helping and protecting our membership.

“As an added bonus, within our Union, you end up working with a dedicated group of consummate professionals as I have.”

President Previsich commented: “I have had the pleasure of working with Brother Lesniewski during my entire career as a nationally elected officer. His professionalism and expertise are at the highest level and his integrity and commitment are confirmed by all who know him. John has been a tremendous asset to our union in all respects and a close and dear friend to me personally. It is my distinct honor to wish John and his wife, Gail, a long, healthy and prosperous retirement.”

John and Gail have been married for 45 years and reside in Noblesville, Ind. They have four children, three of whom are married, and eight grandchildren.

The vacancy created by Lesniewski’s retirement will be filled by the elevation of Alternate Vice President Brent Leonard, effective July 1.

Leonard and his wife live in Topeka, Kan., and have two daughters. 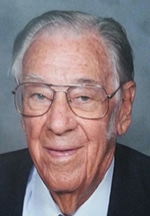 Hicks was local chairperson of Local 904, Evansville, Ind., for 11 years before election in 1963 as general chairperson on Louisville & Nashville Railway (now part of CSX). He was elected alternate vice president of UTU predecessor Brotherhood of Railroad Trainmen in 1968 and re-elected in 1971 and 1975 during UTU conventions. He first took office as an International vice president in 1976. Hicks also served as manager of the UTU Field Service Department from 1981 to 1983. He retired in 1990.

He was preceded in death by his wife of 68 years, Ruth.

He is survived by his two sons, Corkie (Lois) Hicks of London, Ky., and Don (Shirley) Hicks of Owensboro.

In lieu of flowers the family request donations be made to the Shriners Hospital for Children, mail to Rizpah Temple 3300 Hanson Rd. Madisonville, KY 42431.

A link to the full obituary is here.

Masters was a veteran of the U.S. Air Force where he served in occupied Germany following WWII. Before his retirement, he worked in the railroad industry for 42 years. He hired out with B&O Railroad as a conductor/brakeman. Before the former UTU was formed, Masters served as a local chairperson for the Brotherhood of Railroad Trainmen (one of the four UTU predecessor unions). He was a member of UTU Local 404 located in Newark, Ohio. Under the UTU, he served as general chairperson for B&O/CSX GO 49. After serving as general chairperson, Masters was elected to the executive board, before he was elected to the position of international vice president at the 1983 and 1987 conventions.

Masters was also a member of the UTU/SMART TD Alumni Association, American Legion Post #85 and VFW Post #1060. An avid sports fan, he was a fan of the Ohio State Buckeyes, Cleveland Browns and Cleveland Indians.

A member of Local 1709 in Pontiac, Mich., Wigent hired out as a switchman on the Grand Trunk Western Railroad in December 1964. He was first elected as a local officer in 1970 and then served as general chairperson of GO 377. Wigent was elected as a UTU International Vice President at the 1987 UTU quadrennial convention. He was re-elected to the position at the 1991, 1995, 1999 and 2003 conventions. Wigent retired from the position in 2007.

As a vice president, he was instrumental in contract negotiations with SEPTA and also led a strike on the Soo Line in 1994. Wigent wholeheartedly believed in the power of unions and the right of the worker to organize, as evidenced in this 2009 video Wigent made supporting the Employee Free Choice Act.

A time of remembrance and Masonic Service is being held at 11:00 a.m., Wednesday, May 31 at the Old Ptacek’s Store Event Center, 1449 Orrin Road, Prescott, WI 54021. A visitation will be held one hour prior to services. Interment will be at Pine Glen Cemetery in Prescott.