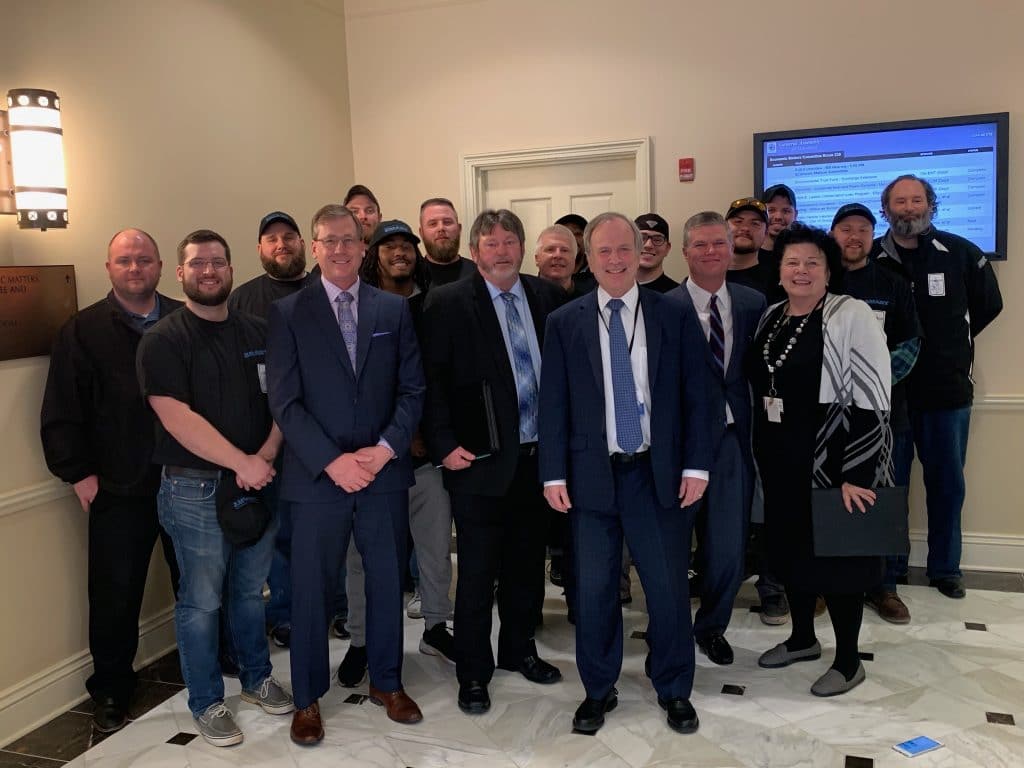 “We are glad the Colorado House of Representatives care about railroad worker safety and community safety for the citizens of the state,” Colorado State Legislative Director Carl Smith said. “We are confident that the state Senate will hold the same beliefs.”

On Jan. 9, the Colorado State Legislative Board released the results of a survey conducted by DFM Research on behalf of SMART TD showing that Coloradans held strong support for two-person crews. The survey, conducted Jan. 2 – 5, 2019, asked 550 random Colorado residents about issues centered on railroad safety. The results showed that 77 percent of Coloradans said that they would vote in favor of two-person crews if given the chance.

SMART TD  is sharing a recent study released by the Midwest Economic Policy Institute at the University of Illinois at Urbana-Champaign, which highlights the economic impact of declining unionization over the past decades across states in the Midwest.

The study found that as unionization declines, wealth inequality between workers and businesses continues to widen particularly in states that have passed so-called “right-to-work” laws (i.e. Michigan, Wisconsin, etc.).

The real goal of “Right-to-Work” is to lower wages for workers and divert that money to the owners and upper management of the company.

Strength in numbers is what sustains our union and is the only thing that can turn the tide.

Your voice matters, so please take a minute to send a message to your representatives in Congress.

Click here to send your message in opposition of HR 785, the National Right to Work (FOR LESS) act; and in support of HR 233, The Safe Freight Act, that calls for two-person crews on all freight trains.

The Portland Press Herald reported that as amphibious vehicles (duck boats), designed to traverse land and water, have increased in popularity over the years, so has the number of accidents and fatalities involving these complicated vehicles.  Advocates for increased safety measures are calling for mandated two-person crews on all duck boats.  Some amphibious vehicle companies have voluntarily  instated policies that mandate two-person crews at all times.  Since rail carriers can’t be counted on to do the same, we need to continue all efforts to pass HR 233.

Take just a couple of minutes to contact your legislator in support of HR 233 – The Safe Freight Act, that includes a two-person crew mandate, by clicking here.

ABC News.com reported that following last week’s deadly New Jersey Transit crash in Hoboken that killed a woman standing on the platform and injured more than 100 commuters, NJT announced a new mandate that requires the presence of both the engineer and a conductor during the final phase of the commute, when the trains are pulling into NJT’s Hoboken or Atlantic City stations.  Read the complete article here.

Investigators from the National Transportation Safety Board (NTSB) began the task of gathering evidence to determine the cause of yesterday morning’s deadly New Jersey Transit crash that injured 114 and killed a woman who was standing on the platform at the busy hub in Hoboken, New Jersey. According to a CNN report, NTSB officials have retrieved the train’s event recorder and will soon interview engineer Thomas Gallagher, who was treated and released from the hospital yesterday. The sharp increase in railway accidents underscores the need to hasten implementation of  Positive Train Control (PTC) systems and mandated two-person crews on all trains.  Read the latest article from CNN, here.
Photo courtesy of CNN.com.

Add this occurrence to thousands just like it – examples of why two crew members are absolutely necessary to safely operate a locomotive.  In a recent news story from NBC Montana, both crew members worked to disengage cargo cars, effectively stopping the fire from spreading and averting a potential disaster. No injuries were reported. Read the complete story here.

Recently, Republican Congressman Louie Gohmert of Texas – one of the most conservative members of the U.S. House of Representatives – cosponsored our two-person crew legislation, H.R. 1763, the Safe Freight Act. This show of support follows cosponsorship from Congressman Trent Franks of Arizona, a member of the conservative House Freedom Caucus. Both are considered among the most conservative members of Congress. Why did Rep. Gohmert sign onto the bill? The simple answer is that one of our members asked him to. General Chairperson Steve Simpson’s office is located near Rep. Gohmert’s, and Steve decided to set up a meeting to engage the Congressman on our issues, including the need for two-person crews on all trains. Steve didn’t shy away because Rep. Gohmert is a conservative Republican; no, Steve’s attitude was that “this is my Congressman, and I will request a meeting.” They talked for more than an hour and Steve convinced this very conservative Republican that the only safe way to operate a train is with a crew of at least two people. Arizona State Director Scott Jones lives in Congressman Franks’ district and decided to set up a meeting with his Congressman. Scott brought along a retired engineer who attends the same church as Congressman Franks and whose children attend bible study taught by the Congressman. These personal connections proved extremely effective as Congressman Franks came out of the meeting as a supporter of the Safe Freight Act and he also became a cosponsor. Last year, one of our bus members, Socorro Cisneros-Hernandez, had an upcoming meeting with Republican Congressman Paul Cook of California and called our office looking for talking points on our legislative priorities. Ms. Cisneros used the information we provided and had a very productive meeting with Congressman Cook, after which he co-sponsored the Safe Freight Act. Most recently, Greg Hynes and I met with another conservative Republican, Ryan Zinke of Montana. After a robust discussion about the two-person crew legislation, Congressman Zinke agreed to sign on as a cosponsor. The lesson from all of these cases is that every member of Congress, regardless of party or ideology, should be viewed as a potential cosponsor of H.R. 1763. Our Washington team will continue to do our part, but when it comes to issues that some members of Congress may not be naturally inclined to support, our members – their constituents – are the ones who can make the most effective case. I am calling on all of you to set up meetings with your Congressional Representatives and ask that they cosponsor H.R. 1763, the Safe Freight Act. We can provide you with handouts and other materials to help. Our recent comments on the FRA’s crew size rule is a good source of information on this issue. Here is the link: https://static.smart-union.org/worksite/PDFs/SMART-TD_BLET_Joint_Comments.pdf If we are going to succeed in passing this bill, we need to be engaged at the local level. Special thanks to Brothers Steve Simpson, Scott Jones and Sister Socorro Cisneros-Hernandez for stepping up to the plate and taking the initiative in getting these new cosponsors. Visit the Legislative Action Center to learn more about the Safe Freight Act and to find out who represents you in congress.