WASHINGTON – The U.S Department of Transportation’s (USDOT) Federal Railroad Administration (FRA) issued to Congress the first National Strategy to Prevent Trespassing on Railroad Property. The report examines the causal factors that contribute to trespassing incidents on railroad property, and responds to a U.S. House of Representatives Committee on Appropriations request.

“Almost every trespasser death or injury is preventable and FRA is working to intensify our efforts,” said FRA Administrator Ronald L. Batory. “Now that we have examined current data on contributing factors of the problem, we are seeking to energize our state and local partners to implement solutions and save lives.”

Preventing trespasser casualties and injuries is a high priority for FRA as part of the Department’s safety mission. In October 2018, FRA convened a Trespasser & Grade Crossing Fatality Prevention Summit at its headquarters in Washington, DC. Secretary Chao, Administrator Batory, representatives from other DOT modal administrations, and key stakeholders from the rail industry, law enforcement, and the navigation industry attended the meeting to discuss strategies to reduce grade crossing and trespasser fatalities, as well as to solicit ideas to develop and implement a comprehensive national plan and strategy. FRA looks forward to coordinating and working with all stakeholders to prevent trespassing incidents, and this report is an important step forward in the continued effort to improve rail safety.

Data gathering and analysis of trespass incidents and close-calls will enable FRA to target its resources to trespassing “hot spots.” Conducting community site visits will help FRA to learn more about the specific local circumstances that contribute to trespassing and work with partners to help implement and evaluate targeted mitigation strategies. Requesting and providing funding will support community-based efforts to deter trespassing. Finally, building strong and enduring partnerships with communities, law enforcement, railroads and other organizations with a shared interest in saving lives will enable FRA to leverage and concentrate available resources, expertise and local knowledge to combat trespassing.

Short term targets for success include stakeholder engagement and implementation of strategies that save lives at trespassing “hot spots.” Over the long term, FRA will measure the success of this national strategy by how much trespassing incidents and casualties are reduced nationwide. 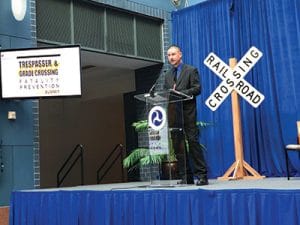 GENOA, Wis. – Charles Burch was heading to his favorite ice fishing spot, a Mississippi River backwater south of Genoa, when he ran into a railroad detective.

The 74-year-old angler said the cop asked where he was headed.

The railroad cop told him if he went across the tracks he’d get a trespassing ticket.

There was no other way to reach the water, so Burch turned around and hasn’t been back to that spot since. Never mind that he’d been fishing that slough for 40 years.

Read more from the StarTribune.

WASHINGTON – The National Transportation Safety Board will hold a public forum March 24-25 on the dangers of trespassing on the railroad right-of-way.

While railroad tracks have long held a cultural resonance with Americans, featured in motion pictures, TV shows, music videos and photography, they are private property. And they can be a deadly place. In 2013, 476 people were killed and 432 were injured in trespassing accidents, according to preliminary data from the Federal Railroad Administration.

The forum, Trains and Trespassing: Ending Tragic Encounters, will be chaired by NTSB Board Member Robert L. Sumwalt. It will feature speakers who have been seriously injured by trains; those whose communities have been affected; and railroad employee assistance program employees whose train crews have struck people on railroad property. The forum will draw on the expertise of railroads, regulators, and researchers, among others, to review the diversity of trespassing accidents and incidents and look at current and future prevention strategies.

The forum will be held at the NTSB’s Board Room and Conference Center, located at 429 L’Enfant Plaza, S.W., Washington, D.C. However, on March 25, the forum will include a tour of Norfolk Southern’s safety train at Union Station.

More information about the forum can be found here: http://www.ntsb.gov/trespassing.

The public can view the forum in person or by live webcast on the NTSB’s website. As soon as they are available, an agenda and webcast details will be posted.

The Federal Railroad Administration (FRA) awarded a research grant for the city of Brunswick, Maine, the Northern New England Passenger Authority (NNEPRA) and the Maine Department of Transportation, among other partners, to participate in a field research program to develop and test new trespass detection and deterrent technologies.

The research will consist of designing, operating and evaluating a large-scale trespass detection and deterrent system to mitigate trespassing along several high-risk areas along the Pan Am Railway and Amtrak’s Downeaster rail line in the Brunswick area.

Read the complete story at Railway Track and Structures.