CLEVELAND, Ohio, (May 20) — The U.S. Department of Transportation (U.S. DOT) Volpe National Transportation Systems Center (Volpe), in partnership with the SMART Transportation Division (SMART-TD) and the Brotherhood of Locomotive Engineers and Trainmen (BLET), is launching a survey in mid-May to learn more about Information and Communications Technology (ICT), which relates to the technology and tools that railroaders use to share, gather and communicate information. The purpose of the survey is to understand how best to communicate important safety-related information to union members and across the railroad industry.

The ICT survey, approved by both SMART-TD and BLET leadership, is being sent to a randomly selected sample of active train, yard, and engine railroaders. Everyone included in this sample is strongly encouraged to respond.

“We support this effort because we believe it will help us to better serve our members. We are collaborating with the Volpe team to reach our members for this survey. Please make time to complete the ICT questionnaire if you receive it,” SMART-TD President Jeremy R. Ferguson and BLET President Dennis R. Pierce explained.

Participation is voluntary and means only completing the questionnaire, which should take no more than 20 minutes. Unique codes for each questionnaire are assigned randomly to participants to keep responses strictly confidential.

Interested parties can learn more about the ICT Survey by contacting Dr. Heidi Howarth, the Volpe project lead, at heidi.howarth@dot.gov or 617-494-2522. This project is sponsored by the Office of Research, Development, and Technology of the Federal Railroad Administration.

The U.S. DOT established Volpe in 1970 to serve as a federal resource positioned to provide world-renowned, multidisciplinary, multimodal transportation expertise on behalf of U.S. DOT’s operating administrations, the Office of the Secretary, and external organizations.

The Brotherhood of Locomotive Engineers and Trainmen represents nearly 58,000 professional locomotive engineers and trainmen throughout the United States. The BLET is the founding member of the Rail Conference, International Brotherhood of Teamsters.

Survey results released by SMART Transportation Division’s Nevada State Legislative Board today show that voters in the state overwhelmingly side with the passage of regulations that require freight trains to be operated by crews consisting of a minimum of two people.

After being asked questions and given information on railroad safety, a staggering 89 percent of respondents to a phone survey, conducted Jan. 28 to 31, 2019, said they would vote for a two-person rail crew law in the interest of keeping their communities safe.

A second crewmember on the train allows for better monitoring of traffic at rail grade crossings, investigates incidents such as grade crossing collisions or derailments when they occur and can communicate or supervise as needed with the engineer to avoid mistakes during the train’s operation, including when the train is secured (tied down).

The catastrophic Lac-Mégantic disaster in 2013 devastated a town in Quebec, Canada, and occurred when a lone crewmember left his train unattended. The oil-carrying train then rolled into the town with no one aboard, and the resulting blast and inferno leveled a portion of the town center and killed dozens of people.

“A second crewmember could have made all the difference in that tragedy,” said Jason Doering, director of the SMART TD Nevada State Legislative Board.

When asked in the survey, Nevada residents agreed:

“Nearly nine of 10 respondents to this poll came out with the understanding of the safety benefits of having more than one person operating a freight train. Safety is a top priority for them, and they want it made law. Requiring all trains in the state to be operated by a crew of at least two people, no exceptions, makes perfect sense, despite what industry interest groups say,” Doering said. “When the duties of each crewmember were spelled out, poll respondents recognized that running a freight train with a single crewmember was a safety risk they would not want to see taken, even with future enhancements in rail technology.”

Nearly 75 percent said that they did not trust advanced technology to serve as a replacement for a crewmember. More than eight of 10 (81 percent) of those surveyed expressed at least some concern of a single-person crew train derailing in their community, and more than half (51 percent) said they were “very” worried that a freight train with one crewmember would derail. Just 19 percent of respondents thought the replacement of a crewmember with advanced technologies would be sensible.

“Those surveyed did not want the safety of where they live left to chance,” Doering said. “They want more than one person on the trains that roll through our communities, carrying goods and hazardous materials through our state at all hours. There is absolutely no question in their minds that two-person crews are safer for all — workers and community members.”

Respondents expressed favorable views of passenger rail, with 55 percent in support of the creation of a high-speed rail line linking Las Vegas and southern California and 61 percent saying that Amtrak should increase available passenger rail service in the state.

The poll, taken by DFM Research of St. Paul, Minnesota, was of 500 random Nevada residents using both cell phones and landlines. The total margin of error of this poll is ±4.4 percentage points with a 95 percent confidence.

Read the full results of the survey (PDF).

The survey was conducted by DFM Research of St. Paul, Minn. on behalf of SMART TD.

Click here to read the entire results of the survey.

Constituents in Illinois, Missouri, Kentucky and eight congressional districts – Pa. Dist. 9, Iowa Dist. 3, Colo. Dist. 4, Kan. Dist. 1, Kan. Dist.  2, Ill. Dist. 13, Ind. Dist. 4 and Mo. Dist. 8 – overwhelmingly disapprove increasing truck weight limits from the current 80,000 pounds to 97,000 pounds. Increasing truck weights range from a low of only 13 percent in Illinois to 19 percent in Colo. Dist. 4 (eastern Colorado). The research data from 5,080 interviews conducted between March 2013 to March 2014 clearly indicate that regardless of where you live, what your political viewpoint may be, or your gender and age, there is a convergence of opinion that heavier trucks are not wanted on U.S. Highways.

View the results of this survey by DFM Research conducted on behalf of the SMART Transportation Division. 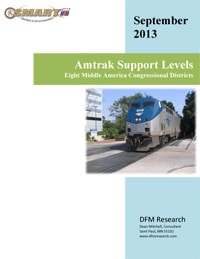 “We polled people who mostly do not live in large passenger rail regions and yet they overwhelmingly said they want the same level of or more federal funding for Amtrak,” said John Previsich, president of the SMART Transportation Division. “What’s interesting about this poll is that a majority of Democrats, Independents and Republicans alike all want to maintain or expand Amtrak service. It is now time for Congress to listen.”

In a poll conducted by DFM Research of St. Paul, Minn., from February to September 2013, eight districts in Colorado, Illinois, Indiana, Iowa, Kansas and Missouri were polled and 70 percent of respondents said they support a robust federal government role in funding Amtrak. In Illinois’ 3rd District, which includes the Chicago Amtrak hub, the percentage jumped to 80 percent.

“This new polling confirms what we have always known: Americans want more, not fewer, transportation choices,” said Edward Wytkind, president of the Transportation Trades Department, AFL-CIO (TTD). “And while too many politicians in Washington are saber rattling about government spending, people across the nation, from conservatives to liberals, believe the federal government has a responsibility to play in supporting and funding Amtrak passenger rail service.”

Previsich added that in the weeks ahead, SMART Transportation Division activists will be working with TTD and the other rail unions to make the case for more federal funding for Amtrak as lawmakers prepare to rewrite federal passenger rail law (known as PRIIA). “This polling will boost our effort to advocate for common sense passenger rail legislation that gives Amtrak and its employees the resources they need to deliver first- class passenger rail service that Americans are clearly telling us they want.”

The full survey results can be found here.

The SMART Transportation Division represents a variety of employees in the freight and passenger rail, mass transit and airline industries throughout the United States.

“With the knowledge that state and local politicians from Kansas, Colorado and New Mexico would be attending this event, Kansas State Legislative Director Ty Dragoo and myself had discussions with Dean Mitchell at the Anaheim regional meeting about doing a survey to show the politicians from our respective states the support the public has for Amtrak, even in the most conservative districts,” Smith said.

The surveys were conducted in Colorado’s 4th District and Kansas’ 1st and 2nd Districts, home to traditionally conservative voters between September 3 and September 10. About 800 adults responded to the survey, 400 in Colorado and 200 in each of the Kansas districts polled.

Seventy-one percent of those interviewed said they would support additional service in the cities of Denver and Kansas City.

Forty-five percent of those polled said that their state governments should provide some funding for Amtrak and 49 percent were in favor of keeping the current levels of government funding. Of the 45 percent that said their state should contribute to the funding of Amtrak, 83 percent stated that they supported their states providing up to one third of one percent of the state transportation budget to keep daily Amtrak service.

“The survey was well worth the expense and will be a valuable tool for the state directors of Kansas, Colorado and New Mexico to present to state legislatures and governors when discussing funding for Southwest Chief service,”?Smith said.

Smith also presented the findings to attendees at the Labor Initiative of the Colorado Democratic Party event held Sept. 18.

Click here to view all results from the survey.

The International Association of Sheet Metal, Air, Rail and Transportation Workers is conducting a survey to better understand your experience as a member of this union. Your participation in this survey would be greatly appreciated.

As a member of the Transportation Division of SMART, your feedback and insight are critical to discovering how we can ensure this union works better for everyone.

Below is a link to the survey, which should take less than a few minutes to complete. Please note the survey will close on Friday, May 17.

Thank you for your participation.

Many of our bus locals have responded to a survey focusing on the health conditions of bus operators. This is a very important step in identifying some of the health issues that we face while on the job.

The Transit Bus Operator Workplace Health and Wellness Survey, sponsored by the Federal Transit Administration (FTA), is an effort to understand health, safety and wellness issues faced by bus operators, and to learn how employers and labor unions are addressing these challenges.

Also responding to the survey were more than 200 transit companies.

Specifically, the survey sought responses on:

* The current state of bus operator health and wellness.

* Identification of who does what to contribute to bus operator health promotion.

* Opinions on how health promotion and wellness affect the work environment, driver retention and transit operations.

All information gathered in this survey will remain confidential, and the results will not indicate specific locals, employers or employees.

The UTU, Amtrak and other labor organizations have designed a survey to aid in the development of training and awareness programs to assist Amtrak employees deal with unruly, disorderly or aggressive passengers.

While development of this program is intended for Amtrak, all UTU members employed in passenger transportation – air, bus, rail and transit – are asked to take the survey.

Click on the link, below, to take the survey. A timely response is essential to designing an educational program.

Note that while your name and email address are required — to limit multiple responses or responses by non-UTU members — such information will be kept confidential.