CHEYENNE, Wyo.—Union Pacific Railroad says it will try to restore one of the largest steam locomotives ever built to operating condition.

The railroad said July 23 it reached an agreement to acquire a “Big Boy” locomotive from the RailGiants Train Museum at the Los Angeles County Fairgrounds. 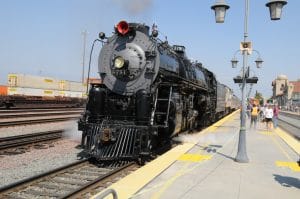 SAN BERNARDINO, Calif. — A steam powered excursion train will be operated to San Bernardino Railroad Days this weekend. The train will have six private passenger cars that will be pulled by the 1927 AT&SF Steam Locomotive 3751.

A diesel-powered Metrolink Locomotive will be placed behind the steam locomotive to provide head end power.  The passenger cars are: