The U.S. Senate recently pointed the way forward for the U.S. Surface Transportation Board (STB) on the issue of ensuring sufficient revenue at freight railroads to pour back into the nation’s infrastructure.

The Surface Transportation Board Reauthorization Act of 2015, which was passed by unanimous consent in June, would provide commonsense process improvements. They would allow the STB to work more efficiently and, at the same time, recognize the need for freight railroads to provide billions of dollars in private spending to build, maintain and grow the nationwide rail network, so taxpayers don’t have to.

In fact, the bill explicitly states that in considering the concept of revenue adequacy, the Board must consider the “infrastructure and investment needed to meet the present and future demand for rail service.” 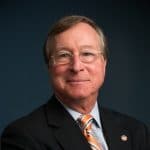 Speaking before a Surface Transportation Board (STB) hearing on railroad revenue adequacy, AAR President and CEO Edward R. Hamberger told the Board that misapplying regulations would have far-reaching impacts on the freight rail industry’s ability to sustain the billions of private funds spent by railroads each year to build, maintain and upgrade the nation’s 140,000-mile rail network.

“As you take up the issue of revenue adequacy, you are painting on a much, much larger canvas than just the inside of this room,” Hamberger said. “What you are considering and may decide here in this hearing room a stone’s throw from the U.S. Capitol will ripple across the economy and ultimately impact most every American.”

Hamberger, and others testifying before the Board, ran through many examples of how earning sufficient revenues has allowed railroads to make massive private investments in rail infrastructure – nearly $29 billion in 2015, and $575 billion since 1980. This is in contrast to other modes of transportation, such as highways, which are funded by taxpayers.

Regulation of railroads’ overall revenue levels would run counter to Congress’s goals in the Staggers Act of 1980 that partially deregulated the freight rail industry to allow railroads to earn sufficient revenue to meet their long-term needs without having to rely on the federal government.

As Dr. Roger Brinner, chief economist with SandPointe, LLC testified, the concept of revenue adequacy should be a goal, and not a directive to constrain revenues; railroads should not be penalized for improved financial performance.

“Now comes a handful of interest groups that want you to cut their transportation costs by direct government intervention at the expense of the greater good. Let’s call it what it is: they want you to institute a regime of wide ranging price controls on freight railroads,” Hamberger testified.

Hamberger outlined the many national goals that would be at risk, should the STB decide to relapse into 1970s-era regulatory policies. Doing so, he noted would undermine the industry’s ability to: continue to improve rail safety, efficiency and reliability; increase U.S. exports; support U.S. energy independence, and effectively provide a healthy rail network relied upon by millions of daily Amtrak and commuter rail passengers.

“Freight rail success today is due to the foresight of the government leaders in 1980 who unleashed the transformational power of the market place through partial deregulation,” Hamberger said. “Subsequent federal involvement in rail economics both in the legislative and regulatory arenas honored the belief that a developed nation requires a top-notch freight rail system and that system is best provided by private companies in control of their resources rather than through the government.”

Daniel R. Elliott III was sworn in June 26, 2015, as the Chairman of the Surface Transportation Board (STB), pledging to continue to promote transparency and to improve and streamline regulation of the Nation’s freight railroads.

At his confirmation hearing before the Senate Commerce, Science and Transportation Committee in May 2015, Elliott stated that he would continue the reforms that he had begun during his first term to increase STB transparency and efficiency; to promote a reliable rail network; and to bring more accessibility to the STB’s processes.

“I would like to thank President Obama for honoring me with this second appointment,”Chairman Elliott said. “I am so pleased to return to the STB to continue work to make sure the STB’s processes are fair, efficient and accessible for all stakeholders. I look forward to working with my fellow board members and board staff to continue the progress that we have made.”

Prior to Chairman Elliott’s first term at the STB, he served for 16 years as associate general counsel to the United Transportation Union. Earlier, he practiced at law firms in Washington and Cleveland. He graduated from the University of Michigan with a degree in political science in 1985 and earned a law degree from Ohio State College of Law in 1989.

The Senate on June 22 easily confirmed the nomination of Daniel Elliott for a reappointment on the Surface Transportation Board.

Elliott’s nomination was confirmed by voice vote. During his confirmation hearing, Elliott said he would ensure the board continues “to facilitate the resolution of service issues so that interstate commerce flows as smoothly and efficiently as possible in support of the U.S. economy.”

Elliott was a lawyer with the United Transportation Union. He was the board’s chairman from 2009 until December, when his term expired.

Congress over the weekend sent to President Obama for his signature a two-month extension of federal funding of highway and transit programs. The surface transportation law known as MAP-21 was set to expire May 31.

The House passed its bill — sponsored by Transportation and Infrastructure Committee Bill Shuster (R-PA.) and House Ways and Means Chairman Paul Ryan (R-Wis.) — a week ago, while the Senate passed the bill on Saturday.

Although pleased that the legislation will prevent a shutdown of summer projects, some transportation industry leaders expressed frustration and disappointment that Congress passed another short-term extension of the Highway Trust Fund.

The Surface Transportation Board today approved Norfolk Southern Railway Company’s (NSR) acquisition of approximately 283 miles of rail line in Pennsylvania and New York from the Delaware & Hudson Railway Company, Inc. (D&H), subject to certain conditions. The lines at issue, known as D&H’s South Lines, consist of approximately 267 miles of the main line between Sunbury/Kase, Pa., and Schenectady, N.Y., and approximately 15 miles of the running track between Voorheesville Junction and Delanson, N.Y.

In reaching its decision, the Board found that NSR’s acquisition of the South Lines from D&H is not likely to cause a substantial lessening of competition or create a monopoly or restraint of trade. The Board found this to be true, even when taking into account D&H’s planned discontinuance of trackage rights that connect to the D&H South Lines, which are the subject of a separate proceeding. The Board concluded that any anticompetitive effects are unlikely and, even if they were to occur, would be far outweighed by the very strong public benefits of the transaction. Such benefits include allowing NSR to provide more reliable, safe, and efficient service for shippers and allowing NSR and rail transportation generally to provide more effective competition with other modes of transportation, such as trucking and barge. The Board issued the approval subject to a number of conditions, including a condition that NSR enter into two voluntary commercial agreements with D&H to preserve certain shippers’ access to two carriers (NSR and D&H).

The Board issued its decision today in Norfolk Southern Railway Company—Acquisition and Operation—Certain Rail Lines of the Delaware and Hudson Railway Company, Inc., FD 35873. That decision may be viewed and downloaded at the STB website, www.stb.dot.gov, under “E-LIBRARY/Decisions & Notices/05/15/2015.”

CALGARY – Canadian Pacific Railway Ltd. is selling a stretch of track in the northeastern United States to a major U.S. railway in a $217-million deal.

Read the complete story at the Winnipeg Free Press.

WASHINGTON – Amtrak is taking action to improve the on-time performance (OTP) of its trains that operate over tracks controlled by other railroads. In a complaint filed on Nov. 17, Amtrak is asking the Surface Transportation Board (STB) to investigate Norfolk Southern Railway and CSX Transportation for causing unacceptable delays for passengers traveling between Chicago and Washington, D.C., on the Capitol Limited service.

Amtrak is taking this action under Section 213 of the Passenger Rail Investment and Improvement Act which mandates that the STB initiate an investigation upon the filing of a complaint by Amtrak if the on-time performance of an intercity passenger train falls below 80 percent for two consecutive quarters. In addition, under federal law, Amtrak has a statutory right to preference in the dispatching of intercity passenger trains before freight trains.

Due to persistent excessive delays caused by NS and CSXT freight train interference, the OTP of the Capitol Limited at its endpoint terminals was 2.7 percent for the quarter ending Sept. 30, down from an already substandard 33.6 percent the previous quarter. The delays are continuing as Amtrak had to provide bus transportation between Toledo and Chicago for six days in October to better accommodate passengers when Capitol Limited trains had often been eight to ten hours late.

Amtrak has taken additional actions to help improve the OTP of passenger trains including filing an amended complaint with the STB seeking an investigation of Canadian National Railway for causing unacceptable delays for passengers on the Illini/Saluki service in Illinois; twice testifying before the STB about the poor OTP of Amtrak trains; and establishing a Blue Ribbon Panel of rail and transportation leaders to identify infrastructure and operational improvements to address rail traffic gridlock in Chicago.

WASHINGTON – Ongoing rail service problems have left power plants from Minnesota to Texas low on coal as an early blast of winter weather hit the nation’s midsection this week.

Some fear the stage has been set for a repeat of last winter, when heavy snowfall and subzero temperatures crippled rail operations in the Upper Midwest and Chicago, which had ripple effects across the rest of the country.

Daniel Elliott III – member, Surface Transportation Board, and upon appointment to be designated chairman;

“I am confident that these experienced and hardworking individuals will help us tackle the important challenges facing America, and I am grateful for their service,” Obama said. “I look forward to working with them in the months and years ahead.”

He has been an editor for several railway-related publications. He received a B.A. from the University of Michigan and a J.D. from Ohio State College of Law.

FARGO, N.D. – Grain elevator and agriculture groups are cautiously optimistic that a more extensive reporting system for railroads, ordered Oct. 8 by the U.S. Surface Transportation Board, will at least allow agricultural shippers to see whether they’re getting the same kind of service as oil, coal and other industries.

The STB, which regulates railroads, ordered all of the nation’s Class I railroads to provide weekly data about shipping. That’s more than the agricultural shipping reporting they had required of only BNSF Railway and Canadian Pacific Railway earlier this summer.

The Senate committee that deals with transportation issues approved a bill to beef up the panel of federal regulators that is supposed to oversee operations on the nation’s freight and passenger railways.

The measure, which was approved unanimously on Wednesday by the Senate Commerce Committee, emboldens the Department of Transportation’s Surface Transportation Board (STB) to be more proactive in its oversight of freight rail companies that operate on tracks in the U.S.