Local 313 (Grand Rapids, Mich.) member Chris Larson, a member of our union for seven years, wrote to the office of SMART-TD President Jeremy Ferguson asking the extent that members can go to support and show solidarity to an ongoing labor action by another labor union against an employer.

More than 1,000 members of the Bakery, Confectionery, Tobacco Workers and Grain Millers (BCTGM) union have been striking for more than a month in locations in Portland, Ore.; Richmond, Va.; Norcross, Ga., and Chicago against Nabisco/Mondelez. Brother Larson suggested in a letter that unionized train operators stop deliveries to the company’s plants in a concerted effort in support of the strikes.

“Nabisco / Mondelz (sic) International will quickly notice when their raw inputs of flour, sugar, and other bulk commodities delivered by rail are no longer being delivered because SMART-TD is supporting the BCTGM strike,” Larson wrote. “I would like to encourage SMART-TD to quickly explore how our union can honor the BCTGM strike by not delivering raw inputs to Nabisco / Mondelz (sic) International by rail.”

While a strong and impactful suggestion by Larson, the federal Railway Labor Act limits when, where and why rail workers can engage in a work stoppage, as the union’s response noted.

“…it is important to note that the governing federal law (specifically the Railway Labor Act, as amended,) limits our ability to go on strike to very narrow and specific circumstances. Unfortunately, those circumstances do not include the secondary strike action you describe in your letter,” the TD office replied.

“We absolutely support the BCTGM workers in their fight for fairness and justice with Nabisco/Mondelez,” Ferguson said. “Our members and leadership will do what we can within the law through personal boycotts and outreach initiated by local members to show support from our union. We thank Brother Larson for speaking up and asking this question, and we appreciate his desire to act in solidarity with our fellow workers at BCTGM.”

Constitutionally, members can act in the interest of their personal safety in areas where a strike is taking place. According to Article 21B, Section 92 of the SMART Constitution:

When a strike of any other nationally recognized labor organization is in effect and danger to the safety of our members exists in or about the area affected by the strike, and/or if there exists any substantial present or potential threat of danger to the members enroute to or from their work, and/or to the members’ families, it is the policy of SMART to support its members in declining to enter the territory directly affected.

The strikes against Nabisco/Mondelez first began in August with BCTGM workers in Portland, then spread to the three additional locations during the month to protest the company’s outsourcing of U.S. jobs to plants in Mexico and the disproportionate hazard pay given to management when workers received only a $300 bonus.

As of this writing, the work stoppages are ongoing, and there are multiple ways TD members and their families can assist in the effort in the spirit of solidarity suggested at the BCTGM website.

Together, we can assist the BCTGM workers to achieve a fair and favorable outcome to stop the corporate greed exhibited by Nabisco/Mondelez management.

SMART Transportation Division officers and attendees of the Association of General Chairpersons — District 1 conference stand together at the conclusion of the meeting on Oct. 3.

INDEPENDENCE, Ohio — Hours after a lawsuit by rail carriers targeting our union over crew consist was announced Oct. 3, the Association of General Chairpersons — District 1 unanimously resolved to act in solidarity.

“In response to the Carriers’ attempts to undermine bargaining and divide us, we, the members of District 1, resolve to act in solidarity in every effort to protect our members and our rights under the Railway Labor Act.”

Every general chairperson in attendance signed the resolution as the meeting concluded.

Transportation Division President Jeremy Ferguson praised the leadership of the General Committees for a quick and unified response at the conclusion of the District 1 conference in the Cleveland area that also finalized the Section 6 notices that will trigger the beginning of the next round of National Rail Contract negotiations.

“As we progress forward into this negotiating period and beyond, solidarity among our membership at all levels everywhere will drive us as we overcome the challenges ahead,” Ferguson said. “This unanimous resolution shows at the outset that we stand together and will speak with one loud, clear voice.”

On Oct. 3, the National Railway Labor Conference (NRLC) filed a lawsuit in federal district court in the Northern District of Texas.

President Ferguson stated that this attempt to undermine our collective bargaining agreements was not unexpected.

“It is not the first time that carriers have attempted this tactic,” he said. “We are well prepared to respond.” 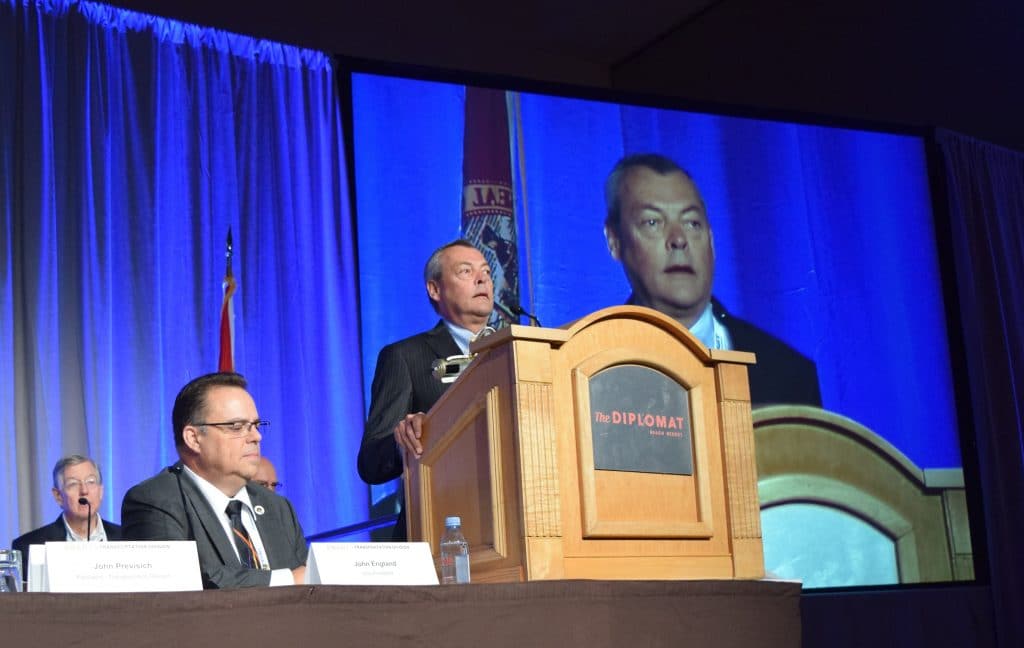 Local UTU officers sacrifice much of their personal time, without compensation, to assist and serve their memberships, and they deserve recognition for their outstanding commitment.

That is what I intend to do in this month’s column.

When the Teamsters initiated a representation drive on our members in Local 1496, who work for Laidlaw Transit in the Riverside area, Lonnie spent hours explaining to his membership the many benefits and advantages of UTU representation and solidarity.

David, a friend of Lonnie’s, volunteered to help and came to Riverside and gave to the members of Local 1496 the perspective of another local on how to work together and resolve internal issues.

This willingness and commitment to assist fellow officers and members, to help them identify, improve and advance their mutually beneficial goals for the betterment of all, is very important to labor-union members everywhere, and especially to those working for Laidlaw Transit.

It also forms the foundation of the UTU and its predecessor labor organizations; it is upon this foundation that the UTU has built 40 years of success.

If you are seeking a solution to a problem in your local, or are looking for information and advice on better serving your fellow workers, you always have brothers and sisters ready to assist.

Together, nothing can stop us.