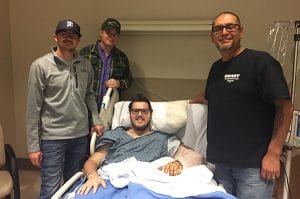 A fundraiser for the newborn granddaughter of Scott Finley, SMART TD member and BNSF conductor with local 113, Winslow Ariz., was recently set up on YouCaring.com. Brenna Finley, daughter of Ariel and Sheldon Finley, was born on August 16, 2017, with multiple health issues. She will have to undergo open heart surgery and a lengthy stay in the hospital. Donations will help defray some of the astronomical costs associated with Brenna’s projected longterm treatment and recovery. Click here to read Brenna’s story and to make a donation.