It happens every three hours in the United States: a person or vehicle is struck by a train. When this tragedy occurs, lives are changed forever: for the people involved in the crash, their family, friends and community, and the train crewmembers.

To raise awareness of the dangers of being on or around railroad tracks, the first U.S. Rail Safety Week is happening this year on September 24-30. This event is being spearheaded by Operation Lifesaver, Inc. in partnership with the U.S. Department of Transportation and other safety organizations.

Activities are being planned each day during the week to share lifesaving messages throughout our communities, including “Operation Clear Track” on Tuesday, September 26, a three-hour exercise to raise awareness and enforce the railroad grade crossing and trespassing laws. 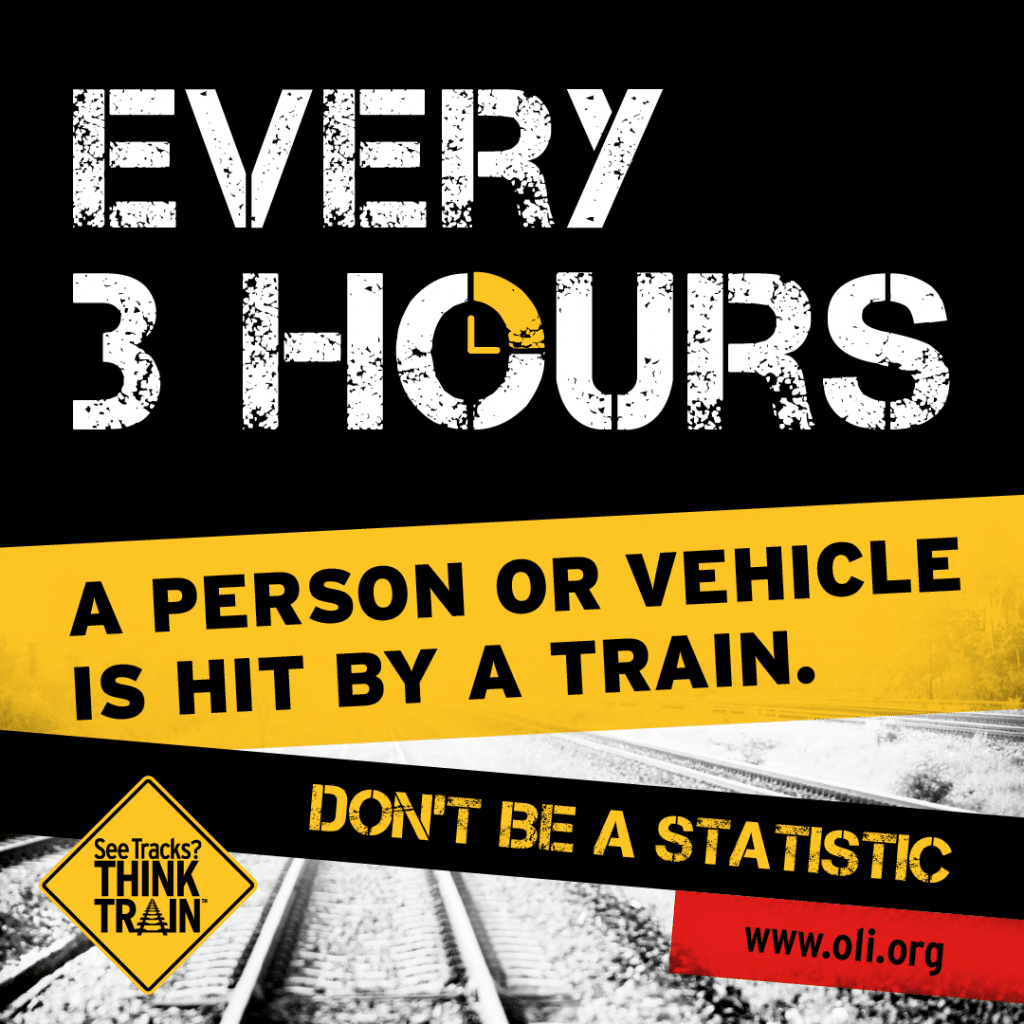 Washington – The Operation Lifesaver, Inc., (OLI) board of directors today (Sept. 23) announced that Joyce Rose will complete her tenure as OLI President later this year, after three years with the national nonprofit rail safety education organization.

Said Rose, “I know that Operation Lifesaver will continue to make progress in the years to come in its core mission – educating drivers and pedestrians to make safe choices near tracks and trains. While I have greatly enjoyed working with the amazing OL team over the last three years, I am excited to pursue new opportunities assisting the transit community with meeting new federal safety requirements.”

Before joining Operation Lifesaver in December of 2012, Rose served as staff director for the Railroads Subcommittee of the House Transportation and Infrastructure Committee. She previously served as a professional staff member of the Highways and Transit Subcommittee. Before joining the House T&I Committee staff, Rose worked for the U.S. Senate Committee on Appropriations from 1988 to 2001 as the professional staffer responsible for Federal transit and rail funding issues, pipelines and hazardous materials, and transportation research.

Barringer noted that the Operation Lifesaver board of directors will conduct a search for Rose’s successor.

“The grants will fund a wide variety of projects to expand the reach of our ongoing safety campaign and further Operation Lifesaver’s mission of eliminating collisions, injuries and deaths at crossings and along rail property,” said Joyce Rose, OLI’s president and CEO. “Through our partnership with the Federal Highway Administration, these grade crossing safety education activities will help us reach critical audiences in many of the states where these incidents are most prevalent.”

“Our rail safety partnership with Operation Lifesaver is very important to FHWA, and we are proud to be a part of the “See Tracks? Think Train!” educational campaign. Safety is our number one priority at FHWA,” said Federal Highway Administrator Greg Nadeau.

Projects funded by the FHWA grants include:

The 13 approved grants were awarded through a competitive process. Selections were made by a panel of safety experts using criteria including successfully leveraging the federal funds with private partnerships, targeted messaging and frequency of highway-rail collisions.

Operation Lifesaver plans to announce the results of a similar grant program for rail transit safety education projects this fall.

WASHINGTON, DC – Operation Lifesaver, Inc.(OLI), in partnership with the Federal Railroad Administration (FRA), announced that $205,000 in grants will be awarded to 13 state Operation Lifesaver programs for a variety of rail crossing safety and anti-trespassing public education projects. Most of the projects will incorporate public service announcements (PSAs) from the nonprofit safety group’s “See Tracks? Think Train!” public awareness campaign.

“The grants will fund a wide variety of projects to expand the reach of our ongoing safety campaign and further Operation Lifesaver’s mission of eliminating collisions, injuries and deaths at crossings and along rail property,” said Joyce Rose, OLI’s president and CEO. “Thanks to our partnership with the Federal Railroad Administration, these activities will help raise awareness of the dangers near tracks and trains in many of the top states for these incidents.”

The Federal Railroad Administration, a national partner and advisor of Operation Lifesaver, provides the funding for the grants.

“Safety is our number one priority at FRA, and we are proud to be a part of the “See Tracks? Think Train!” educational campaign and this important grant program,” said Acting Federal Railroad Administrator Sarah Feinberg.

State programs will use the grants for a variety of efforts, including “See Tracks? Think Train!” PSA placements in movie theaters, on television, radio and billboards; digital media outreach; and conducting community events and rail safety enforcement blitzes. Both rail crossing safety and trespass prevention will be addressed by the state programs managing these projects.

The approved grants were awarded through a competitive process. Selections were made by a panel of railroad safety experts using criteria such as successfully leveraging the federal funds with private partnerships, targeted messaging and the frequency of pedestrian-train incidents and highway-rail collisions.