Virginia State Legislative Director Ronnie Hobbs reports that H.B. 440, the two-person freight crew bill that has passed the state House, is scheduled for a hearing Monday, February 17, at the state Capitol.

“We’re asking all of our Virginia members and their families to spend the day to get the word out,” Hobbs said. “Now is the time for us to show our state senators the importance of this public safety matter.”

The bill passed the House of Delegates by a 61-37 vote in January and there was a great show of support by SMART members and retirees. Hobbs would like to see that duplicated Monday.

Contact Hobbs at rhobbs1313@gmail.com for more details on how to show your support in the fight to keep two on the crew.

Virginia’s House of Delegates on Wednesday passed H.B. 440, a two-person freight crew bill, by a 61-37 vote, with one delegate abstaining.

The bill now moves on to the state’s Senate.

“We’ve hit third base,” SMART TD Virginia Legislative Director Ronnie Hobbs said. “It’s going to take some work from all of us, but we’re getting to work to bring it home to the Governor’s desk.” 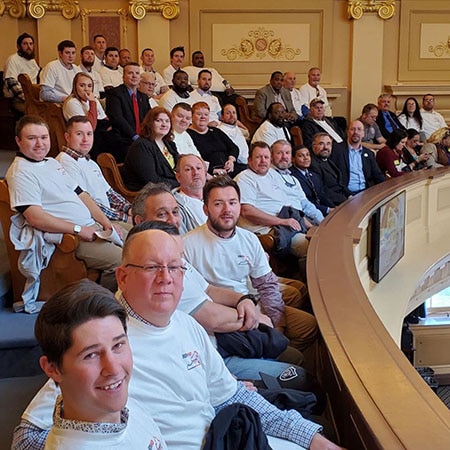 Supporters of the Virginia two-person crew bill, H.B. 440, fill the House chamber on Jan. 22 to show their support for the legislation in this photo courtesy of Virginia State Legislative Director Ronnie Hobbs.

There was a strong show of support in the state Capitol for the bill by members from both the Sheet Metal and TD sides. After the passage was announced by House Speaker Eileen Filler-Corn, cheers from supporters filled the chamber.

H.B. 440 levies fines on freight carriers who do not operate with two crew members in the cab with exceptions for hostler or yard service.

Hobbs said the effort that got the bill through the House will need to be sustained and more support from members will be needed as work continues in the state Senate.

“We had a great turnout and filled the chamber,” Hobbs said. “There has been great effort from members and retirees who have been reaching out to officials and letting them know about how two people are needed on the crew. If we keep this up, the bill will pass.”

Hobbs said that he will keep members informed as the bill progresses and thanks everyone for their strong support. Contact Hobbs at rhobbs1313@gmail.com for more details on how to show your support.

H.B. 440, which was introduced by Delegate Steve E. Heretick of District 79, passed the House’s Committee on Rail and Commerce Jan. 16 by a 13-8 vote.

Virginia’s full House of Delegates soon will be considering H.B. 440, a two-person freight crew bill, after it passed the body’s Committee on Commerce and Labor Jan. 16 by a 13-8 vote.

“This is a big win — a huge win today,” said Virginia State Legislative Director Ronnie Hobbs, who said that prior attempts at passage never made it past the subcommittee level. “Now, we’ve got to get ready for the House hearing.” 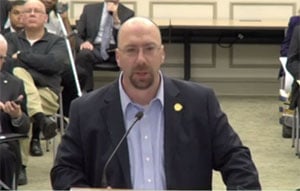 Hobbs said a number of members and Alternate National Legislative Director Jared Cassity were there at the hearing to show that they backed the bill, which establishes fines for freight carriers who do not operate with two crew members in the cab with exceptions for hostler or yard service.

That support will need to be sustained and more support from members will be needed as the effort continues to get passage of the bill, which was introduced by Delegate Steve E. Heretick of District 79.

“As Jared said, we need to fill the mezzanine when the bill comes up in the House,” Hobbs said. “They need to see our members.”

Hobbs said that the result in Virginia shows that elections do have consequences — control of the House changed in November, and candidates who are more supportive of rail safety efforts were elected to office.

Hobbs said that he will keep members informed as the bill progresses and thanks everyone for their strong support.

“We’re rounding second and heading to third base,” he said.

Contact Hobbs at rhobbs1313@gmail.com for more details on how to show your support.

Video of testimony from the hearing appears below.

A two-person crew bill is headed to the Virginia House of Delegates’ Commerce and Labor Committee and SMART-TD members in the region are asked to come show their support for the legislation.

H.B. 440 is scheduled for a first hearing in the House Committee Room in the afternoon of Thursday, Jan. 16, in the state Capitol Building, 1000 Bank St., in Richmond, Va. The time that the bill will be discussed is undetermined as the committee meeting begins a half-hour after the adjournment of the House of Delegates’ regular session that day.

The bill has been introduced by Delegate Steve E. Heretick of District 79 and establishes fines for freight carriers who do not operate with two crew members in the cab with exceptions for hostler or yard service.

“We’d never gotten it out of the subcommittee before,” Virginia State Legislative Director Ronnie Hobbs said. “Now it has gone straight to committee.”

A great show of support from union members in the state will help to show the legislators that this legislation matters for the safety of both rail workers and for the public.

For more details on how to meet and show support, contact Hobbs at rhobbs1313@gmail.com.

Voters can cast absentee ballots in person at their local voting registration office.

By voting absentee, Virginia residents can make sure their work schedule or a family emergency does not impact their right to vote. To vote absentee in Virginia, voters must have a reason (code 1D or 1E should work for rail workers and retirees).

“No matter whom you choose, choose to vote early!” Hobbs said.

A man’s rail career was jeopardized after eating a gummy bear, and SMART Transportation Division cautions members of the risks of a positive drug test after consuming “hemp products,” which are unregulated by the federal government and considered illegal by federal law.

Virginia State Legislative Director Ronnie Hobbs says a 28-year-old member experienced a positive Department of Transportation drug test after eating a candy containing the substance cannabidiol, commonly known as CBD, which is a chemical derived from the marijuana plant.

CBD is legal in products in many states, including Virginia, and reportedly has medicinal properties such as relaxation, pain relief and anxiety reduction in users. Because of these properties and the adoption of medical marijuana laws in multiple states, hemp products containing CBD such as ingestible pills or tablets, candies, “vaping” fluid, topical ointments and oils have become more widely available.

“This is a major issue,” said Hobbs. “These products can cost members their jobs – you don’t know what you’re buying.”

The Federal Railroad Administration (FRA) issued a statement in late April warning of the potential risk of using anything containing CBD, such as gummies or hemp oil.

Since CBD comes from the marijuana plant, federal law considers it an illegal Schedule I controlled substance, even though it may be for sale and legal to use in individual states. Because the federal government considers it illegal, products containing it are unregulated by the Food and Drug Administration (FDA) and there is no oversight of these products.

As a result, users of hemp products run the risk of taking in the intoxicating component of marijuana called delta-9 tetrahydrocannabinol, aka THC. Since there is no regulatory oversight, the label may claim the products have no THC content, but there is no guarantee that is the case, the FRA said.

“CBD products can, therefore, be definitely a ‘buyer beware’ concern in terms of product content and quality control,” the FRA stated. “In addition, CBD products may be innocently or purposefully sold with varying amounts of THC present, which will obviously not be listed as an ingredient.”

So the label might be wrong, saying that the product didn’t contain THC when it actually did, as was the case for the member, Hobbs said.

“It’s creative packaging,” he said. “We need to get a strong message out. Even though the packaging says, ‘no THC,’ there could be THC in there. There’s no oversight.”

“If THC is present in sufficient amounts, that could potentially be the source of a positive federal drug test,” the FRA said.

Even if a regulated employee says the source of a positive marijuana test is a hemp product, FRA says the test still will be verified by the Medical Review Officer (MRO) as a positive result.

That’s what happened to the father of two after just one gummy bear, Hobbs said.