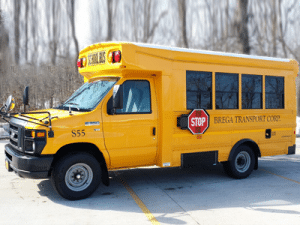 Of 17 eligible voters, 10 voted for SMART while three voted for no union.

“I thank CSX and Norfolk Southern new-hire class instructor Justin Humphries and Local 1291 Chairperson Jacob Lane for all of their hard work in this campaign,” Ross said. “I also want to recognize the efforts of Cara McGinty at the Transportation Division Headquarters in North Olmsted, Ohio. She truly put a lot of time and energy in bringing this organizing drive to a successful conclusion.”

Bay Line Railroad is a 103-mile short line freight railroad that interchanges with CSX Transportation and Norfolk Southern. Commodities transported by the carrier include aggregates, brick and cement, chemicals, coal, food and feed products, forest products, metallic ores and minerals, and steel and scrap. It was acquired by Genesee & Wyoming in 2005.

Non-union employees at a commuter rail operation in the state of New Mexico expressed interest in union representation and now they have it.

The Rail Runner Express operates over approximately 100 miles of right-of-way, serving the metropolitan areas of Albuquerque and Santa Fe.

“I extend my sincere appreciation to SMART Transportation Division’s assistant state legislative director in New Mexico, Donald A. Gallegos, for his efforts. He went above and beyond the call of duty during this campaign,” Ross said.

“I also thank the members of SMART Sheet Metal Division Local 49 and Business Manager Vince Alvarado for the use of their facility in Albuquerque as our base of operation.”

“Hopefully, we can reach an agreement soon for our 38 new members.”

The commuter rail service is administered by the New Mexico Department of Transportation over right-of-way purchased from BNSF Railway. Operation and maintenance of the line and equipment is currently under contract to Herzog Transit Services, Inc.

Campus shuttle operators for the University of Tennessee’s transportation service chose the SMART Transportation Division as their collective bargaining representative in a representation election April 16.

Of the approximately 50 eligible voters, 26 voted for SMART, 10 voted for no union representation and 13 chose not to participate in the election

SMART Transportation Division Director of Organizing Rich Ross and Alternate Vice President – Bus Calvin Studivant spent nine days on the campus just prior to the vote, engaging operators in discussions about their needs and answering their questions.

The operators are employed by First Transit, Inc., based in Cincinnati, Ohio.

“The good news for this group of operators is that Calvin is close to finalizing an agreement for the First Transit group at Rutgers University that we organized in December and will be negotiating this contract with the same labor relations officer,” Ross said. “Hopefully, due to their familiarity, they can reach a mutually acceptable agreement quickly.”

In an effort put forth by SMART TD’s Director of Organizing Rich Ross, SMART TD brought three short lines to the fold in an election held March 4, 5 and 6.

“I would like to thank NS/CSX new hire Instructor/Organizer Justin Humphries for his help in this organizing effort,” Ross said.

The Conecuh Valley Railway (COEH) operates over 12 miles of track southwest from Troy, Ala., to Goshen, Ala. The COEH interchanges with CSX at Troy and handles about 3,000 carloads per year. The line transports poultry feed ingredients, plastic, lead, vegetable oil and food products.

The Three Notch Railroad (TNHR) operates over 34 miles of track southeast from Georgiana, Ala., to Andalusia, Ala. TNHR interchanges with CSX at Georgiana and handles approximately 1,050 carloads per year. The line carries chemicals, polypropylene, fertilizer and agricultural products.

The Wiregrass Central Railway (WGCR) operates 20 miles of track in Alabama, west from Waterford to Enterprise. The line intersects with CSX at Waterford and handles around 8,200 carloads per year, carrying poultry feed ingredients, peanut products and seed.

Among 112 eligible voters, 74 of the 80 operators participating in the union election chose SMART as their representative, while six voted for no union.

The bus service is managed by First Transit, Inc., based in Cincinnati, Ohio.

SMART TD Director of Organizing Rich Ross lauded the efforts of organizer and Alternate Bus Vice President Calvin Studivant saying, “Calvin just did an outstanding job. We had a meeting at Rutgers a couple of weeks ago and approximately 90 drivers attended. Calvin was well received during the meeting and was recognized for his efforts and for his knowledge of the bus industry.”

Studivant has more than 25 years of experience as a bus operator for Community Transportation in Clifton, N.J.

Ross also noted the efforts of Local President Waverly Harris and Vice Local President Brian Caldwell in assisting with the organizing campaign and helping drivers realize the benefits of union representation. Both are members of SMART TD Local 1594 at Upper Darby, Pa., employed by a division of Southeastern Pennsylvania Transportation Authority (SEPTA).

The Rutgers-New Brunswick/Piscataway inter-campus bus and shuttle system provides efficient and reliable transportation service for all five campuses. It is available to all members of the university community and the public.

According to First Transit’s website, the service is the second largest operating bus system in New Jersey, transporting more than 6 million passengers annually and providing more than 70,000 passenger trips per day. It operates approximately 50 transit buses that utilize bio-diesel fuel and Green Roads technology in an effort to reduce emissions and petroleum consumption.

The train operators at the Sprinter Rail Facility in Escondido, Calif., chose SMART Transportation Division representation in a May 28 vote.

In a unanimous vote, the Sprinter operators opted for representation under the SMART umbrella.

The Sprinter runs every 30 minutes in each direction, Monday through Thursday, from approximately 4 a.m. to 9 p.m. Friday and Saturday trains run later.

SMART TD Director of Organizing Rich Ross thanks all involved for “this complete team effort.”

In their final approach for union representation, the pilots of Avantair, Inc., successfully touched down on the SMART Transportation Division runway.

The Feb. 14 vote brought 224 Avantair pilots under the SMART umbrella. Among the pilots who participated in the representation election, 77 percent voted in favor of SMART.

“Our ability to represent transportation employees was one of the key factors in their choice of UTU/SMART,” said SMART Transportation Division Director of Organizing Rich Ross. “They had specific questions and wanted answers about union representation and we were able to accommodate their needs. Now we have to get down to business to get them a contract.”

“These pilots fly everywhere and anywhere at any time of the day. We set up a lot of conferences calls at all hours of the day in this campaign,” Ross said. “Some of these guys are working 80 hours a week.”

“I also want to thank the pilots’ group that initially approached us. They were the key to making this a successful campaign.”

With fractional jets, some customers may buy a share of a plane rather than an entire plane. Their fee is pro-rated and the cost of an aircraft is spread among a number of investors. They then have access to a plane for a specified number of hours or days per year on short notice.

The company operates of fleet of Piaggio Avanti P180 aircraft.

Employees of the Texas & Northern Railway Company this week were successful in their efforts to bring union representation to their property.

The railroad, based in Lone Star, Texas, provides rail transportation service to U.S. Steel’s Texas Tubular operations, as well as other customers on its line, including A&A Coating, Friedman Pipe and Lone Star Specialties .

The Class III railroad comprises 7.6 miles of the trackage and 32 miles of storage tracks. It interchanges with Kansas City Southern operations at Veals Yard.

“I would like to personally thank Mike and Calvin for their work put forth in this victory. There was a lot of traveling and a lot of effort involved,” Lewis said.

Train and engine service employees on Birmingham Terminal Railway – a Watco property – have voted to be represented by the SMART Transportation Division.

Formerly known as Birmingham Southern Railroad, the 76-mile line provides service to more than 30 customers in the Birmingham, Ala., region, and connects with BNSF, CSX and Norfolk Southern.