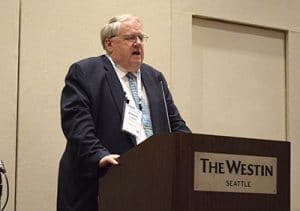 The AFL-CIO’s Transportation Trades Department (TTD) on March 11 announced the railroad industry issues that the coalition of transportation unions, of which SMART Transportation Division is a member, will prioritize in the coming months.

Of the highest importance, the policy statement identified continuing the progression of safety measures, including national legislation.

“More can and must be done to further improve safety, minimize risk on railroads, and ensure frontline workers and the communities they operate in are fully protected,” the TTD said in its policy statement. “By reauthorizing the now-expired Rail Safety Improvement Act of 2008 (RSIA), closing perilous loopholes in existing regulations, and advancing common sense safety regulations that prioritize a vibrant and healthy rail workforce, Congress and the administration have an opportunity and obligation to ensure that the future of rail is safer than ever before.”

“Rail workers cannot be expected to do more with a reduced workforce, fewer resources, and less sleep while simultaneously improving safety and minimizing risks,” the TTD concluded. “Rail labor will work vigorously with Congress to ensure adequate safety measures are implemented through the reauthorization process and will challenge any attempts that are made at the expense of safety, workers’ rights and their jobs.”

The policy statement was released in conjunction with the TTD’s Executive Committee meeting in New Orleans.

Chuck Akers, lifelong train engineer, was forced to retire early after three physicians concurred that his numerous experiences with collisions that were caused by vehicles and people blocking the tracks (he was cleared of any wrongdoing in all incidents), had culminated into Post Traumatic Stress Disorder (PTSD). PTSD is on the rise  among our nation’s locomotive engineers and conductors. View the complete story posted by Roanoke.com, here.

Montana’s oversight of railroad safety falls short at a time when volatile crude oil train traffic from the Bakken region, already high, is only expected to increase, a new audit found.

Montana has no active rail safety plan and employs only two inspectors to cover the vast state, the Montana Legislative Audit Division report released Wednesday said. In addition, there is a lack of statewide emergency planning and hazardous-material response capability should an oil spill occur, the report found.

That’s a potentially precarious situation with a new crude oil transfer station in North Dakota coming online that should boost oil traffic crossing Montana from about 10 trains a week to up to 15 cars per week. One out of every five Montanans lives in an evacuation zone for an oil-train derailment, which is within a half-mile of a rail line, the report said.

As the most senior member from Illinois on the House Transportation and Infrastructure Committee and the representative of a district that is home to more miles of train tracks than any other – in addition to the fact that I live less than a mile from a line that carries about 150 trains a day (some carrying Bakken oil) – I am concerned by the recent number of railroad accidents.

This has spurred me to take an even greater role in finding solutions that will keep our communities safe.

Read the complete story at www.mysuburbanlife.com.