MPR News’ Tom Weber interviewed Raskin and Qualy for their expertise on trains from the inside out.

They talked about the jobs of conductors and engineers and what role they play in ensuring the safety of our railways.

Listen to the interview from MPR News. 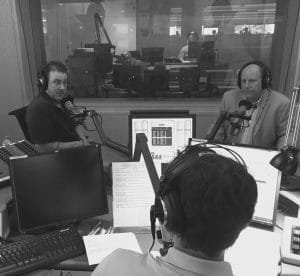 Two Minnesota lawmakers have introduced legislation in the state’s legislature that would require two persons on all Class I and II carrier freight trains operating in the state.

S.F. 918 will be heard before the Senate Transportation and Public Safety Committee on Monday, March 16, at 2 p.m. at the state capitol, Transportation Division State Legislative Director Phillip Qualy said. The Senate Judiciary plans to hear S.F. 918 the following day, March 17.

The Republican-controlled House of Representatives has yet to schedule a hearing for the companion legislation, H.F. 1166.

“Our state legislation is not federally pre-empted and does not contain language that can be construed as a collective-bargaining area,” Qualy said “Unfortunately, the railroads are misleading the legislature with inaccurate and erroneous information. The carriers’ practice to remove more and more persons from the right-of-ways of American railroads endangers the general public”.

Minnesota has the eighth largest rail network in the United States. The SMART Transportation Division in Minnesota continues to advise the legislature on oil transportation, grade-crossing safety and supports the Minnesota AFL-CIO’s Working Family agenda.

The Minnesota Legislature is scheduled to adjourn May 20, 2015.

“The men and women in Minnesota and around the country that work in yard-switching operations should be able to see where they are walking. This is a great step forward and will become a model for many other states’ consideration,” SMART Transportation Division President John Previsich said.

Added Transportation Division National Legislative Director James Stem: “Phil Qualy and our Minnesota Legislative Board understand the needs of railroad workers. Congratulations to them on their great work on behalf of their members.”

“The legislative board would be remiss if we did not report to our membership that from the carrier’s testimony before the legislature, it is difficult not to conclude that while the railroads want to talk about safety, they do not want you to have yard lighting,” Qualy said. “We will see how the carriers react to enactment of the Railroad Yard Lighting law. Their actions will reveal management priorities and how corporate financial budgeting will be targeted.”

In summary, the new law puts in place the following provisions:

1.) Sets the AREMA (American Railway Engineering Maintenance of Way Association) policy as a minimum standard and guideline for future lighting of rail yards;

2.) Sets a maintenance standard that malfunctioning lighting must be repaired to Minnesota Electrical Code within 48 hours of first report to the carrier;

3.) Sets forth that annual reports from railroad carriers and railroad labor shall be submitted to the Minnesota Department of Transportation Freight Rail Office by Jan. 15. If there is any discrepancy between carrier and labor reports, MnDOT shall investigate and report the areas in question to the legislature, including what will be necessary to bring yards to the AREMA standard.

4.) Sets a standard for lighting review at locations where cars or locomotives are switched or inspected, or where trains are assembled or disassembled frequently.

5.) Prescribes that at any yard where hazardous material cars are switched, inspected, picked-up or set-out frequently, or 25 hazmat tank cars are placed in trains frequently, or any yard within two miles of a major refinery where hazmat is placed in a train, the yards must be lighted to the AREMA standard by Dec. 31, 2015.

“We can work with this state law,” Qualy said. “This should get our railroad yards in Minnesota lighted going forward in this decade. We deferred to the wisdom of the Minnesota Legislature and railroad labor has prevailed.”

Also contained in H.F. 3172 are statutes naming rail labor as participants in hazmat planning and training, the creation of three positions for MnDOT safety inspectors, and the “Minnesota Oil Spill Defense Act,” that will ensure public first responders are trained and equipped with fire and disaster equipment. MnDOT will also invest resources for grade-crossing improvements along high-density hazmat corridors.

Finally, H.F. 3172 appropriates transportation funding that has been traditionally spent on short-line rehabilitation projects to Class I railroad projects that will divert hazardous material away from population centers in western Minnesota.

House File 2881, the Railroad Crew Van provision, has also been signed into law and will strengthen our current crew-van statutes, Qualy said.

Brotherhood of Locomotive Engineers’ Minnesota Legislative Director Dave Brown had been the primary advocate for H.F. 2881 – the Crew Van law. “It was good to work the BLET Director Brown as we remained focused on passage of these laws to the final day of the 2014 session. On behalf of our membership, I also want to thank Minnesota AFL-CIO Legislative Director Jennifer Schaubach, who was instrumental in finding a compromise for our yard-lighting legislation with an entrenched, obstinate, railroad lobby,” Qualy said.

The SMART TD Minnesota Legislative Board also, on the last day of the legislative session, worked with State Rep. Jason Metsa on the introduction of House File 3394, which would increase fines on carriers that intentionally block grade crossings. Qualy said train crews have reported that CN Railway train dispatchers continue to order train crews to not cut or open grade crossings. “Hopefully, they will discontinue these illegal directives,” Qualy added.

“The Minnesota Legislative Board extends its appreciation to all SMART-TD officers who testified before the legislature, our SMART TD National Legislative Office, SMART TD’s Iowa and North Dakota Legislative Boards, the officers of our BNSF, CN, Canadian Pacific and Union Pacific general committees of adjustment, our political consultant Dean Mitchell of DFM Group, and our SMART TD designated legal counsel – along with Larry Mann – all of whom really stepped-up to assist us in these efforts. We are also grateful to all of our members who made telephone calls to assist in this effort.

“As SMART Transportation Division-represented employees, we are also Minnesotans first,” Qualy added. “With the close of this two-year legislative cycle, our SMART TD and Minnesota AFL-CIO Working Family Agenda has moved the safety and security of our membership forward in a positive and productive manner. Our state of Minnesota is doing well and we look forward to the election season with optimism.

“Please contribute to your Minnesota UTU PAC. Your political voice is an essential investment in your future. Each member’s small contribution makes one large voice for transportation labor. UTU PAC does not cost, it pays.”

“This particular oil is especially volatile and as we have seen through recent catastrophic accidents in North Dakota and Quebec, our communities and neighborhoods are at increased risk,” Rep. Frank Hornstein, D-Minneapolis, said in announcing the initiative on the edge of a St. Paul railyard along with Sen. Scott Dibble, D-Minneapolis.

Read the complete story at InForum.

The governor announced through his press secretary that he will urge legislative leaders to hold hearings on the United Transportation Union’s reports of deteriorating safety conditions at Canadian Pacific – allegations the company flatly denied.

Read the complete story at the Star Tribune.

The SMART Transportation Division’s Minnesota State Legislative Board is sponsoring an open house June 17 for all active and retired members from all carrier properties.

This free educational experience will be held from 10 a.m. to 8 p.m. at the Roseville Radisson Hotel at 2540 N. Cleveland Ave. in Roseville, Minn., State Legislative Director Phillip Qualy reports.

UTUIA Field Supervisor Ron Tokach will be available to review your insurance needs and update any policies you may currently hold and UTU designated legal counsel will be present to provide legal services updates.

Qualy will be available to discuss a variety of issues and will be ready to assist anyone wishing to contribute to the UTU PAC fund. All members signing new PAC pledges will be eligible for a July 4 UTU PAC gift raffle.

Retired members who are not already UTU Alumni Association members can enroll in the program and also enjoy video archives of UTU labor actions over the past 30 years.

Free food and beverages will be available throughout the day. All members who are not working on that day are encouraged to attend.

Print this flyer for display at your current crew location.