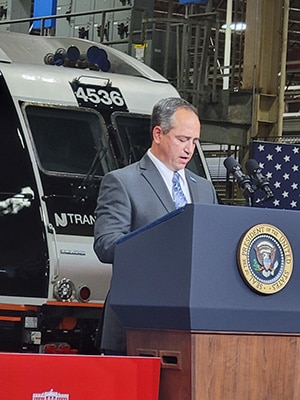 The 2022 fiscal year budget proposed by the Biden administration May 28 offers a net increase in funding to the Railroad Retirement Board (RRB) to cover accumulating administrative costs and to improve customer service.

The White House’s budget request of a little over $125 million for RRB, if approved by Congress, would result in a gain of $11 million for RRB to cover staffing needs to better serve railroad workers nearing retirement, retirees and their survivors.

In its budget request to U.S. House leadership and to Vice President Kamala Harris, RRB reported that it has a staffing deficit of 12% from its minimum levels and that the RRB’s programs office has been operating at a reduced capacity because funding for the agency has been nearly flat for five years. Its workforce also is aging, with nearly a quarter of its workers now eligible to retire and 231 employees eligible to retire in the next year.

The added funding will allow RRB to increase its ranks to 801 full-time employees at a time when it needs workers to take care of retirement, survivor claims and numerous other customer-facing duties that had been hampered by the COVID-19 pandemic and chronic understaffing. In its budget request, RRB reported that just 35% of the 1.2 to 1.3 million calls its Bureau of Field Services received were answered in FY2020.

“We are operating in a transitional state that requires a sufficient investment in staffing to sustain benefit determination and payment operations, which still rely heavily on manual processing, while ensuring that the agency retains the knowledge of our laws and systems critical to modernizing benefit payment systems,” the agency stated. “The RRB believes that an increase in staffing is critical to the success of the agency over the next few years.”

The budget request is not the only way the current administration is working to improve RRB.

The agency’s years-long project to upgrade its IT infrastructure finally received full funding through Biden and Congress’s American Rescue Plan. The agency said that the modernization of RRB’s systems should also help to open the door to better service and more efficiency once fully implemented.

“We are grateful to the Congress for providing annual and supplemental appropriations that have fully funded RRB’s IT Modernization program,” RRB stated.

President Joe Biden on April 26 signed an executive order that created a Task Force on Worker Organizing and Empowerment to increase union density and union organizing in the country.

The group will be led by Vice President Kamala Harris and DOL Secretary Marty Walsh and have more than 20 members of Biden’s Cabinet and heads of agencies involved, according to a fact sheet released by the White House.

“American workers have faced increasing barriers to organizing and bargaining collectively with their employers. Economic change in the United States and globally, technological developments, and the failure to modernize federal organizing and labor-management relations laws so they respond appropriately to the reality found in American workplaces have made worker organizing exceedingly difficult. The result has been a steady decline in union membership in the United States over past decades,” a White House fact sheet on the creation of the task force stated. “Since 1935, when the National Labor Relations Act was enacted, the policy of the federal government has been to encourage worker organizing and collective bargaining, not to merely allow or tolerate them. In the 86 years since the Act was passed, the federal government has never fully implemented this policy.”

The task force intends to, within 180 days, recommend ways that current policies, programs and practices can be used to promote worker organizing and collective bargaining in the federal government and identify where new policies, regulatory and statutory changes are needed to achieve the task force’s mission.

The goals set forth for the task force are:

Read an article on the task force by Business Insider.

Read a fact sheet on the task force.