Your help is needed to get the word out to certain members of Congress who want to take pension money from our Sheet Metal brothers and sisters and other union workers covered by multi-employer pension plans.

A decade ago, in the midst of the Great Recession, SMART and other multi-employer pension plans had the foresight to take steps to make sure they could meet their necessary obligations even during a period of financial collapse. These steps involved sacrifice on the part of these plan participants and resulted in solvent and stable pension plans able to meet their obligations for years to come.

However, there is a minority of pension plans covering about 1 million participants that did not make these changes, and these pensions could run out of money in the future. In addition, the Pension Benefit Guarantee Corporation (PBGC), which serves as a safety net for financially troubled pensions, is having money troubles of its own. It could be insolvent within a decade.

To address these shortfalls, Congress has convened a Joint Select Committee to consider ways to resolve the potential insolvencies. But the draft plan being considered by this Congressional committee could punish healthy and solvent pensions, like the one covering SMART members, for the sake of solving the financial shortfalls of the failing pensions and the PBGC.

Politicians need to know that this plan is not acceptable, and we ask that you make it clear that another solution, one that does not take money away from solvent plans, must be found.

Our SMART brothers and sisters need our help, please call. You also can text PENSION to 21233 and to be connected directly to your congressional office. Message and data rates apply for that service.

Members of the Joint Select Committee:

A suggested script for your call to Congress:

My name is ___________ and I am a member of SMART Transportation Division Local ____. My union brothers and sisters in the International Association of Sheet Metal, Air, Rail and Transportation Workers participate in a multi-employer defined benefit pension fund.

I am calling today to voice my strong opposition to the current proposal of the Joint Select Committee. This proposal attempts to infuse money into the broken PBGC on the backs of healthy pension plans and forces the funding status of well-performing funds to go backward.

My union does not endorse this proposal, nor do I. We expect any friend of labor to stand with us on this position.

SMART Transportation Division National Legislative Director John Risch addressed the National Association of Retired and Veteran Railway Employees (NARVRE) in Council Bluffs, Iowa, on May 21, touching on the current national political climate and the need for retirees to step up to protect what is rightfully theirs amid renewed attacks on unions.

“What is happening in D.C. is what I call ‘an erosion of civility,'” Risch told attendees at NARVRE’s 41st Biennial Convention at the Hilton Garden Inn. “Add to that erosion the closeness of the numbers in each house of Congress, and you have a keen focus on the next election, not a keen focus on what’s right for our country.” 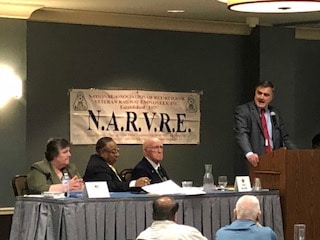 An explosion in deficit spending caused by the tax cuts and spending bills passed by Congress at the end of last year once again has fueled talk by some politicians of cutting so-called entitlements.

Politicians’ eyes see the nest egg of Railroad Retirement — the result of the hard work of current and past railroaders — and would love to dive into that pension plan, Risch told the retirees.

NARVRE, an advocacy group out of Mississippi, has worked to preserve Railroad Retirement benefits for more than 80 years for members of all rail unions.

“When Speaker Paul Ryan and his crew talk about the need to rein in ‘entitlements,’ you need to know that what they want to cut is your Railroad Retirement benefits and reduce your Medicare coverage,” he said. “Something you already paid for, but since the government used the money for things like tax cuts for the railroads, they want to break the agreements that were made with all of us.”

Those attacks should rouse retirees and active workers alike to action, Risch said.

“When the debt and deficit debate starts in earnest, we need NARVRE, and more importantly, NARVRE members to shout out: ‘No to any cuts in our pension, Medicare and Medicaid.’ Our union, of course, will be there, but we can’t do it alone,” Risch said. “Your grassroots response is the only thing that will stop substantial cuts to these vital safety nets.”

Greedy corporate interests also are looking to tear unions down these days. The Janus case pending in the U.S. Supreme Court could kill “union security clauses,” allowing those who don’t pay dues to leech off public unions, he told attendees.

“It’s Janus and public employees today, and the rest of us will be next,” Risch said.

Other threats include the potential of automation to further whittle away railroad jobs and for politicians to eliminate Amtrak in the name of savings. These scenarios would have a catastrophic effect on Railroad Retirement’s sustainability.

But speaking out can help preserve what Risch calls the “crown jewel” that rail workers created.

“It’s not NARVRE or the rail unions that will protect our pension,” he said. “It’s the grassroots efforts of our members and people like all of you in this room — people who demand of their congressional delegation that Amtrak gets the money it needs; who demand that Congress keep their hands off our Railroad Retirement and Medicare,” Risch said.

“The good news is very few Americans are politically active, meaning those that are have far more clout then they should. So I’m calling on each of you to use that clout. Call your elected representatives, attend their town hall meetings and speak out. That’s what’s effective.”

Buried in the $1.1 trillion spending bill that President Barack Obama signed into law is a provision that would allow the benefits of retired truckers, construction workers and others who contributed to so-called multi-employer pensions to be cut for the first time.

This change — potentially affecting as many as 1.5 million current and future retirees in underfunded plans, mostly union workers — will undoubtedly set off volleys of finger-pointing to find a culprit for the accelerating collapse of the system. Many commentators will blame unions for extorting extravagant, unsustainable retirement packages from employers that are now falling apart. But it’s not so simple. In fact, the long, tangled history of U.S. private pensions is equally a story of how business sought to manage labor, conserve profits and block the expansion of a modern welfare state.

Research by historians such as Jennifer Klein and Steven Sass helps explain why the United States is almost unique in its reliance on private, company-sponsored pensions instead of comprehensive, government-sponsored benefits.

LANSING, Mich. – Americans for Prosperity, the conservative advocacy group supported by the Koch brothers, has launched an effort to torpedo a proposed settlement in the Detroit bankruptcy case, potentially complicating chances for completing the deal just as its prospects seemed to be improving.

The organization, formed to fight big government and spending, is contacting 90,000 conservatives in Michigan and encouraging them to rally against a plan to provide $195 million in state money to help settle Detroit pension holders’ claims in the case, a key element of the deal.