Oregon Live reported that approximately 100 residents remain unable to go back to their homes in Mosier, Oregon, following an oil freight derailment on Friday.

Possible environmental concerns arose regarding the Columbia River, as a light oil sheen can be seen floating on the river’s surface. 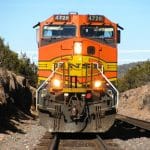 The Seattle Times reported that the five activists who blocked BNSF tracks in Washington during September 2014 were recently convicted of trespassing.

In a petition for rulemaking, Schneiderman asked the agency to require all crude transported by rail in the United States to achieve a vapor pressure of less than 9 pounds per square inch (psi).

The trend emerged in the past six months and marks a shift in a years-long boom in transporting crude-by-rail after rail companies, such as Greenbrier and GATX, rushed to increase tank car capacity as the U.S. shale revolution took off five years ago.

MINNESOTA – Lack of action during this year’s legislative session doesn’t mean nothing’s being done regarding rail safety as oil trains keep passing through the state and region.

About 3,000 firefighters and other emergency responders from 80 departments throughout the state have been trained to respond quickly to oil-train-related disasters, and the Minnesota Pollution Control Agency has increased scrutiny of the accident response plans prepared by railroads and emergency personnel.

On the national level, the Federal Railroad Administration permanently extended a requirement for railroads transporting highly explosive oil, such as the crude being shipped from the Bakken region of North Dakota, to disclose the expected movement of their trains. The extension came after prodding from Sen. Al Franken and others.

Another round of targeted tank car and rail inspections in New York found 62 defects, including one “critical” safety defect that required immediate corrective action, Gov. Andrew Cuomo announced on Wednesday.

The inspections are part of the governor’s efforts to address the safety of crude-by-rail shipments. State and federal teams examined 524 tank cars and about 152 miles of track and 38 switches during the inspections.

If you want to carry crude oil in an older railroad car, it’s going to cost you.

Fort Worth-based BNSF Railway, the largest U.S. crude-by-rail carrier, is offering lower rates to lug oil in cars that meet the latest federal specifications issued in May. That means the vast majority of cars riding the rails today, known as DOT-111 and CPC-1232, will cost more to haul.

The new rates are part of a plan by the railroad, owned by Warren Buffett’s Berkshire Hathaway, to push older cars off the tracks as regulators scrutinize the industry over a series of high-profile derailments and explosions. To that end, BNSF published higher rates for older cars relative to more advanced models, such as the DOT-117, said spokesman Michael Trevino.

Trenton, N.J. – While admitting that their hands are largely tied, New Jersey lawmakers on Monday, June 15, took steps to better prepare the state in the event of a catastrophic oil train accident.

“There is not a whole lot we can do to regulate rails going through our area because they are primarily regulated by the federal government, and I use the word regulated in quotes sometimes,” said state Sen. Loretta Weinberg (D-Bergen). “The federal government has predicted that we will see… explosions and disasters with increasing frequency as more oil is shipped to refineries.”

Investigators from the National Transportation Safety Board (NTSB) and Federal Railroad Administration (FRA) are on the scene today of a BNSF Railway Co. crude-oil train that derailed and caught fire yesterday morning in Heimdal, N.D.

The BNSF train consisted of 109 total cars, 107 of which were loaded with crude oil. Two buffer cars were loaded with sand. Six of the crude oil cars derailed at about 7:30 a.m., resulting in a fire and the town’s evacuation. All other cars were pulled away from the scene to a safe distance. No injuries were reported, according to a statement issued by BNSF.

The tank cars involved in the incident were the unjacketed CPC-1232 models, which are among the tank-car models slated for retrofits or phasing out under new federal rules governing the safety of crude-by-rail transportation.

A train carrying crude oil through Wells County, North Dakota derailed May 6. At least six rail cars have caught fire, sending thick, black plumes of smoke billowing into the sky. The village of Heimdal and nearby farms were evacuated.

BISMARCK, N.D. – North Dakota lawmakers agreed Monday to spend more than $500,000 on a rail safety pilot program proposed in the wake of a fiery oil train derailment near Casselton in 2013, with some saying it doesn’t go far enough.

Read the complete story at www.inforum.com.

MOUNT CARBON, W.Va. – Fires burned for hours after a train carrying more than 100 tankers of crude oil derailed in a snowstorm in West Virginia, sending a fireball into the sky and threatening the water supply of nearby residents, authorities and residents said Tuesday.