State Legislative Director Stu Gardner reports that an additional round of testimony has been scheduled for 11 a.m. Tuesday, Dec. 10, 2019, in House Hearing Room 114 in the Ohio Statehouse, 1 Capitol Square in Columbus, regarding H.B. 186, a comprehensive railroad safety bill under consideration in the state’s House of Representatives.

Only proponents of the bill who have not given testimony previously are eligible to state their case for this important legislation that will protect lives and preserve the safety of railroad operations in Ohio.

Gardner, rail safety legal expert Larry Mann, members of the Ohio State Legislative Board, SMART-TD members and representatives from the BLET have provided testimony in favor of this legislation, which covers the following safety issues:

In an email to members, Gardner indicated that the rail carriers requested a fifth hearing (Ohio bills typically receive three committee hearings before being voted upon for advancement to the full state House) due to Mann’s strong proponent testimony delivered Nov. 19.

However, more TD members and others concerned about railroad safety need to step up and be heard, and this fifth hearing could be the last chance to convince representatives that H.B. 186 deserves passage.

“It is up to all of our advocates of the Ohio State Legislative Board and the SMART Transportation Division to step up and let these committee members hear the truth one more time,” Gardner said. “Please come and fill the hearing room, give testimony and show these representatives what we are made of.”

The bill is sponsored by Ohio Reps. Mike Sheehy, a retired rail worker and member of the SMART TD Alumni Association, and Brent Hillyer.

Proponent testimony must be provided to Matthew Taylor in Committee Chairman Doug Green’s office (Matthew.Taylor@ohiohouse.gov.) with the deadline for electronic submission of both written and in-person testimony and a witness slip being 3 p.m. Dec. 9, the Monday before the hearing. On the day of the hearing, witnesses have the option of presenting their testimony in person before the committee if they have submitted the testimony and required witness slip by the deadline.

Instructions for those wishing to testify before the committee:

Instructions for those wishing to submit written-only testimony:

Following testimony provided by the bill’s opponents on Oct. 22 in which they argued that it was futile for the state to consider passage of H.B. 186 because of pending legal challenges to legislation in Illinois and Nevada, the Ohio State Legislative Board coordinated a campaign to convince bill co-sponsors Reps. Brett Hillyer and Mike Sheehy, as well as committee Chairman Doug Green and House Speaker Larry Householder, to grant an additional hearing.

“We believed that an additional hearing for expert proponent testimony was needed in order to set the record straight,” Ohio State Legislative Director Stu Gardner said. “This additional testimony is solely at the discretion of the Transportation Committee Chairman Doug Green to allow (the bill) to go forward or not.”

Mann has served as the SMART TD Designated Legal Counsel’s rail safety coordinator since the position was created in 2008 and has extensive legal experience in the transportation industry, including being the principal draftsman of the Federal Railroad Safety Act of 1970.

“Larry is the foremost rail safety expert in the United States,” Gardner said. “He has dealt with the issue of preemption raised by the railroads for many years. He will counter the statements raised by the railroads in their recent opponent testimony concerning legislation covering two-person crews, blocked crossing, walkways and yard illumination.”

Gardner requests that SMART TD members and railroad workers fill the committee’s room in Columbus for a third time at 11 a.m. Nov. 19.

“Once again, (let’s) show our solidarity on HB 186, and our concerns over our safety, and the safety of the communities that our trains pass through and where the yards that we work in are located. Demonstrate our resolve to those Transportation & Safety Committee members that will ultimately decide to pass this legislation out of committee, and forward to the House,” he said.

State Legislative Director Stu Gardner said that a hearing for opponents of H.B. 186 to appear before the Ohio House Transportation and Public Safety Committee has been scheduled.

Opponents are scheduled to give testimony at 11 a.m. Tuesday, Oct. 22 in Ohio Statehouse Room 114 in Columbus.

The opponent hearing before the committee was delayed at carriers’ request so that the carriers could bring in representatives from Washington, D.C., to testify and try to stop the bill’s passage, Gardner reports.

“We need a group of our supporters to attend this hearing in order to show the committee members we believe in all phases of HB 186,” Gardner said. “Let’s fill that hearing room with our activism and presence.”

Members representing SMART Transportation Division as well as representatives from the BLET provided more than two hours of proponent testimony last month to show state House Transportation and Public Safety committee members why the railroad safety legislation is deserving of their support.

Gardner suggests that Ohio members either call the offices or set up in-person meetings with members of the committee who are listed below.

The bill is sponsored by Ohio Reps. Mike Sheehy, a retired rail worker and member of the SMART TD Alumni Association, and Brent Hillyer. 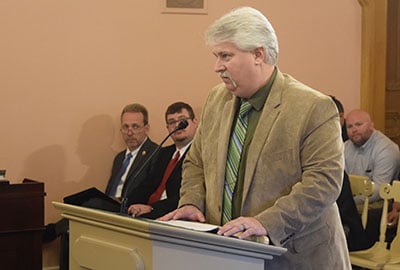 Ohio State Legislative Director Stu Gardner requests that members from his state show their support for H.B. 186, a comprehensive rail safety bill that is receiving its first hearing in the Ohio Legislature on Tuesday, June 18.

Ohio Reps. Brent Hillyer and Michael Sheehy, who is a retired SMART TD member and a member of the TD Alumni Association, will introduce the bill at 11 a.m. to the House Transportation Committee in Room 114 at the statehouse in Columbus.

“An overwhelming show of support is our goal,” Gardner said. “Show those members of the Transportation Committee that we care and are serious about our safety, and the safety of the communities the we work in and pass through.”