BNSF announced on Wednesday in a letter to employees that three maintenance shops will be closed in Montana and Wyoming, while additional mechanical department job cuts will occur in Alliance and Lincoln, Neb.; Mandan and Minot, N.D.; Topeka, Kan.; and Superior, Wis.

“In total, approximately 19 salaried and 344 craft positions will be impacted,” the carrier stated. “These adjustments come as the result of long-term structural market changes, most notably in the coal and energy sector, and reduced demand for freight transportation services at the impacted locations.”

The Wyoming facility closures will result in 122 jobs lost. In Topeka, 28 jobs will be cut.

“Closing our facilities and reducing jobs in communities where we’ve had a long-lasting presence is a difficult but necessary decision,” the carrier said.

Follow this link for more details about the layoffs.

North Dakota locals will be holding informational meetings for their members on April 30 in Fargo, May 1 in Minot, and May 2 in Bismarck.

These meetings provide an exceptional opportunity to learn about your benefits and visit with union officers and representatives from the Railroad Retirement Board, UTUIA, health care and other insurance plans as well as SMART TD Designated Legal Counsel.

All members, retirees, and spouses/significant others are welcome to attend any of the meetings. There is no registration; just come if you can.

Here is the schedule:

Click here to view a pdf of this event. 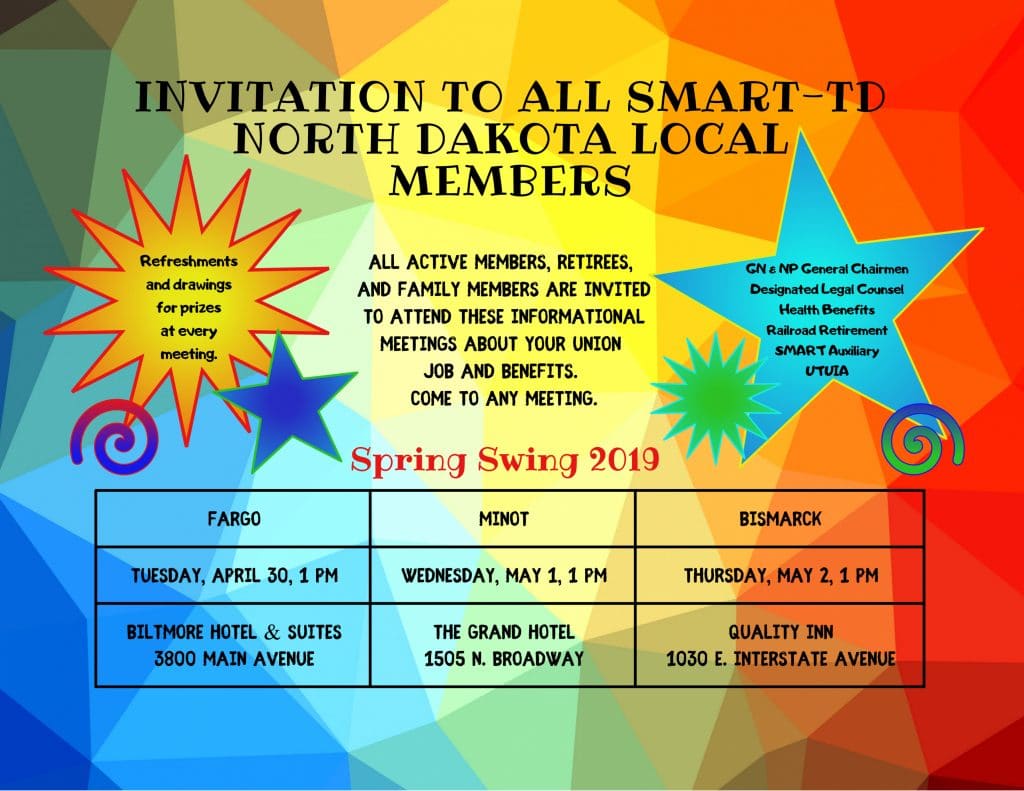 North Dakota locals will be holding informational meetings for their members the last week in April. These meetings provide an opportunity to learn about your benefits and visit with international officers, general chairmen, and representatives from the Railroad Retirement Board, UTUIA, healthcare and other insurance plans, the Auxiliary of the UTU and Designated Legal Counsel.

All members, retirees, and spouses/significant others are welcome to attend any of the meetings. There is no registration; just come if you can. For further information, call North Dakota State Legislative Director Jim Chase at 701-223-0061 or send an email to utu4nd@gmail.com.

Both inspectors for a state rail safety program — aimed to prevent such fiery derailments involving crude oil as happened this year near Weimdal, N.D. — have been hired and are training with federal inspectors.

In July, an agreement was approved by the Public Service Commission with the Federal Railroad Administration to begin a pilot rail safety program in the state. The program is to supplement the work of the several FRA inspectors assigned to North Dakota and several other states in the region.

Read more from The Bismarck Tribune.

Bakken Shale crude oil shipments via train have resumed in North Dakota, but there remain unanswered questions about what caused 10 tanker cars to derail and ignite in Heimdal, ND, earlier this month.

A spokesperson for BNSF, the railroad involved in the derailment, told NGI‘s Shale Daily on Tuesday that the National Transportation Safety Board (NTSB) continues to investigate the May 6 accident, and the company is prevented from disclosing “any information that is germane” to the investigation.

In Washington, DC, an NTSB spokesperson said a final report, including identifying the cause of the incident, is likely to take up to a year, but some interim reports may be issued. NTSB’s Jim Southworth has been the investigator-in-charge.

BISMARCK, N.D. – North Dakota lawmakers agreed Monday to spend more than $500,000 on a rail safety pilot program proposed in the wake of a fiery oil train derailment near Casselton in 2013, with some saying it doesn’t go far enough.

Read the complete story at www.inforum.com.

North Dakota’s energy regulators are considering new rules to make the state’s “Bakken” crude oil, which has been involved in a number of explosive train crashes, safer to move by rail.

Proposed standards announced Thursday by the state Department of Mineral Resources follow a series of fiery rail accidents over the last 18 months that have made ballooning number “crude by rail” shipments highly controversial across the country.

Read the complete story at

All members and their spouses are welcome to attend any of the three meetings and lunch will be served at the conclusion of each meeting. For further information, call (701) 223-0061 or send email to utu4nd@gmail.com. The schedule is as follows: 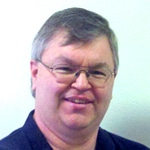 BISMARCK, N.D. (AP) — Federal investigators said Wednesday they have recovered a broken axle at the scene of an oil train derailment and fire in southeastern North Dakota but don’t know yet whether it caused the wreck.

“We’ll want to know if it was the actual cause of the derailment, or was it broken during the derailment?” National Transportation Safety Board member Robert Sumwalt said.

Read the complete story at the San Francisco Chronicle.