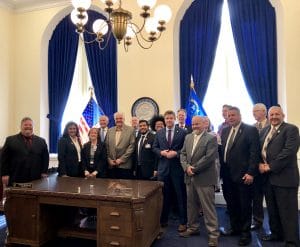 The advocacy and hard work of SMART Transportation Division members and retirees, the Nevada State Legislative Board and a coalition that included Sheet Metal brothers and sisters, other rail unions and safety-conscious members of the public has paid off.

Nevada Gov. Steve Sisolak signed A.B. 337 on May 15. Two-person crews are now required on Class I and II freight trains being operated in the state or the carriers will face steep fines.

The bill’s signing caps a massive effort by SMART TD members that spanned years in the face of carrier opposition.

“This law didn’t pass by accident. It was the hard work of Jason Doering, our Nevada state legislative director, and others that made it happen,” SMART TD National Legislative Director John Risch said. “We all owe Jason and others who worked on this our thanks for keeping train operations safe in Nevada, for not just those who operate trains but for the public as well.”

Doering and his board assembled a group of dedicated advocates who helped to spread the important message about how crew size is, first and foremost, about keeping communities safe.

“Many people helped to get the word out about the public safety ramifications of this legislation,” Doering said. “Those concerted efforts paid off, and now we’ve ensured that the state’s railways stay safe with two crew members in each freight train’s cab.”

The legislation was sponsored in the State Assembly by Susie Martinez, a Teamster who, Doering said, “treated him like family” and whose staffer, Carlos Hernandez, assisted in the early stages of getting the bill passed.

Additional backers included Assemblywoman Maggie Carlton, also a primary sponsor of the legislation, as well as Assemblywoman Shea Backus, who testified before the state Senate and expressed strong support during an Assembly Growth and Infrastructure Committee hearing, and Assemblyman Richard Carrillo, another co-sponsor whose father was a United Transportation Union member.

“Really — all of the Nevada Assembly and Senate Democrats, as well as the governor, receive my thanks for their understanding of the important protection to public safety that this law provides,” Doering said. “There is too much risk involved in transporting hazardous materials and goods across our country and through our communities to have a single crewmember on trains that are a mile long or even longer.”

The law establishes fines of $5,000 for a first offense, $10,000 for a second offense within three years and $25,000 for a third and all other offenses for Class I and II carriers that operate freight locomotives without at least two people in the cab. Hostling and helper services are not covered by the law.

Doering and his board were stung by the 2017 veto by then-Gov. Brian Sandoval, a Republican, of S.B. 427, a prior try at two-person crew legislation that had passed both houses of the Nevada state Legislature.

But a change in leadership brought a new opportunity with Sisolak’s election last year.

“No doubt we were disappointed in 2017, but this is a prime example of how elections matter,” Doering said. “We cracked open the door with our previous effort and laid the groundwork. With that change in leadership in the state Capitol, it was opened even wider.”

The Nevada State Legislative Board especially wanted to thank members from SMART’s Sheet Metal Local 88 out of Las Vegas, who helped to amplify the message.

“They were an extraordinary help!” Doering said. “Jeff Proffitt and Alfonso Lopez — we couldn’t have moved anything without their support. Sheet Metal put rail labor on the map in Nevada.”

Also advocating for the legislation was Fran Almaraz, who helped set up meetings and facilitated a relationship with legislative leadership, Doering said.

Assisting the cause as well were TD Colorado State Legislative Director Carl Smith, who provided guidance after succeeding earlier this year in getting two-person legislation made into law in his state, Dean Mitchell, who helped in researching and targeting the message and the TD Public Relations Department, which helped to compose an op-ed published by the Nevada Independent and put together print material to get the word out about the legislation.

And, as he did with S.B. 427, Brotherhood of Locomotive Engineers and Trainmen’s Nevada State Legislative Board Chairman Matt Parker mobilized BLET members to advocate loudly in favor of the legislation.

“It truly was a team effort,” Doering said.

A.B. 337 was approved April 23 by the State Assembly by a 29-12 vote and in the state Senate on May 7 by 13-8 margin. Both votes were party line with Democrats voting in favor of the legislation.

“This successful passage in Nevada proves that our persistence pays off,” Risch said. ”Concerning two-person crews, the message of public safety did not change from two years ago and will not change going forward. It’s that simple. Two crew members are vital to ensuring that these trains are operated safely and that our communities are secure.

“Legislators in Nevada knew this before, and they know it now. As a result of the 2018 election, the leadership in the governor’s office changed and now this safety-focused, common-sense bill has been made law.”

The Nevada State Legislative Board reports that A.B. 337, legislation requiring two people in the cab of freight trains in the state, passed in the state Senate on Tuesday by a 13-8 party-line vote.

The bill is in the process of enrollment — receiving signatures from both the Senate and General Assembly leadership — and is expected to be on Gov. Steve Sisolak’s (D) desk for his signature in the coming weeks, Nevada State Legislative Director Jason Doering said.

If the bill is signed by Sisolak, Nevada would become the second state this year to successfully enact two-person crew legislation. A bill in Colorado was signed into law on March 21.

A bill in Maryland (H.B. 66) has successfully passed both houses of its Legislature and is awaiting action by Gov. Larry Hogan.

Two-person crew legislation also is progressing in Minnesota (part of H.F. 1555, an omnibus transportation bill) and in Illinois (S.B. 24). The support of members in both states is important for both pieces of legislation to be passed.

Minnesota residents can contact these legislators to show support for the Minnesota bill.

If you are a resident of Illinois, follow this link to find your state legislators and help to keep up the momentum for S.B. 24.

Follow this link to send an email to your representative in support of the national Safe Freight Act.

A bill requiring a two-person crew on Class I and Class II railroads in the state of Nevada passed one house of the state’s Legislature on April 23.

By a 29-12 vote, A.B. 337 was approved by the Nevada State Assembly. The bill’s primary sponsors were Assemblywomen Susie Martinez and Maggie Carlton.

The bill, introduced on March 18, now moves on for consideration in the state Senate.

If you are a Nevada resident, the Nevada State Legislative Board has a Facebook page where you can stay current on what’s going on with the bill.

In Illinois, S.B. 24 was passed by the state Senate by a party-line 36-19 vote on Thursday. The state House of Representatives’ Rules Committee has received the bill, which establishes a minimum crew size of two individuals, and will consider it. The bill’s primary sponsor in the Illinois House is state Rep. Jay Hoffman (D – Dist. 113).

“Thanks to everyone who contacted their state senator, this couldn’t have been done without you,” The Illinois State Legislative Board said in a post on its Facebook page. “The General Assembly will now go on a two-week holiday break so please be ready to reach out to your State Representatives in their district offices.”

If you are a resident of Illinois, follow this link to find your state legislators and help to keep up the momentum for S.B. 24.

As previously reported here, the Nevada State Assembly’s Committee on Growth and Infrastructure passed A.B. 337, 8-4. The bill now moves to the full Assembly for consideration.

If you are a Nevada resident, you can find your state legislators by following this link.

A two-person crew bill also has been passed in Maryland and awaits the action of Gov. Larry Hogan.

National Legislative Director John Risch said that more than 1,500 messages from members and retirees have been sent to members of the House in support of the Safe Freight Act and the bill has been gaining co-sponsors.

“Hearing from their voters goes a long way to opening the door to our message in the halls of Congress,” Risch said. “This is a team effort, so keep up the emails and phone calls.”

To send an email in support of the national Safe Freight Act, follow this link.

Survey results released by SMART Transportation Division’s Nevada State Legislative Board today show that voters in the state overwhelmingly side with the passage of regulations that require freight trains to be operated by crews consisting of a minimum of two people.

After being asked questions and given information on railroad safety, a staggering 89 percent of respondents to a phone survey, conducted Jan. 28 to 31, 2019, said they would vote for a two-person rail crew law in the interest of keeping their communities safe.

A second crewmember on the train allows for better monitoring of traffic at rail grade crossings, investigates incidents such as grade crossing collisions or derailments when they occur and can communicate or supervise as needed with the engineer to avoid mistakes during the train’s operation, including when the train is secured (tied down).

The catastrophic Lac-Mégantic disaster in 2013 devastated a town in Quebec, Canada, and occurred when a lone crewmember left his train unattended. The oil-carrying train then rolled into the town with no one aboard, and the resulting blast and inferno leveled a portion of the town center and killed dozens of people.

“A second crewmember could have made all the difference in that tragedy,” said Jason Doering, director of the SMART TD Nevada State Legislative Board.

When asked in the survey, Nevada residents agreed:

“Nearly nine of 10 respondents to this poll came out with the understanding of the safety benefits of having more than one person operating a freight train. Safety is a top priority for them, and they want it made law. Requiring all trains in the state to be operated by a crew of at least two people, no exceptions, makes perfect sense, despite what industry interest groups say,” Doering said. “When the duties of each crewmember were spelled out, poll respondents recognized that running a freight train with a single crewmember was a safety risk they would not want to see taken, even with future enhancements in rail technology.”

Nearly 75 percent said that they did not trust advanced technology to serve as a replacement for a crewmember. More than eight of 10 (81 percent) of those surveyed expressed at least some concern of a single-person crew train derailing in their community, and more than half (51 percent) said they were “very” worried that a freight train with one crewmember would derail. Just 19 percent of respondents thought the replacement of a crewmember with advanced technologies would be sensible.

“Those surveyed did not want the safety of where they live left to chance,” Doering said. “They want more than one person on the trains that roll through our communities, carrying goods and hazardous materials through our state at all hours. There is absolutely no question in their minds that two-person crews are safer for all — workers and community members.”

Respondents expressed favorable views of passenger rail, with 55 percent in support of the creation of a high-speed rail line linking Las Vegas and southern California and 61 percent saying that Amtrak should increase available passenger rail service in the state.

The poll, taken by DFM Research of St. Paul, Minnesota, was of 500 random Nevada residents using both cell phones and landlines. The total margin of error of this poll is ±4.4 percentage points with a 95 percent confidence.

Read the full results of the survey (PDF).