SEATTLE — SMART Transportation Division National Legislative Director John Risch gave attendees a broad overview of the landscape of the transit industry on the third day of the TD regional meeting.

Among the topics covered: how to grow support for transportation-related bills in Washington, D.C., train automation, operator safety, stock buybacks and the potential threat politicians pose to what they describe as “entitlements.”

“If you see something, do something,” Risch told the crowd, encouraging them to get involved by running for public office, engaging government officials face-to-face to educate them about the issues important to the transportation industry and being more visible at public meetings and in the media. 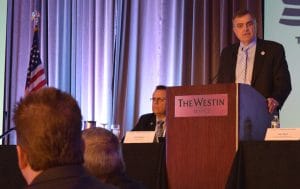 He praised the grassroots efforts of Socorro Cisneros-Hernandez, a bus member out of Local 1607 in Los Angeles, who took it upon herself to meet Republican U.S. Rep. Paul Cook at a town hall meeting. After the discussion, Cook signed on to the Safe Freight Act (H.R. 233) as one of the 112 bipartisan members in the U.S. House who support the two-person crew bill.

General Chairperson Steve Simpson (GO 489) met with U.S. Rep. Louie Gohmert, a Texas Republican and one of the most conservative congressmen, and also was able to get Gohmert to sign on in support of H.R. 233 and to advocate for funding for the National Mediation Board, Risch said.

Risch said the responses received by the Federal Railroad Administration in a request for comments on automation in the rail industry largely agreed with rail labor’s approach — that all trains should have two-person crews.

“The vast majority, with a handful of exceptions from railroads, of the comments were comments saying the only safe way to be allowed to run a train through America is with two crewmembers — a certified conductor and a certified locomotive engineer,” Risch said. “It’s a safety issue — it’s an issue to where you need two people to get the job done.”

The House bill, introduced by U.S. Rep. Grace Napolitano of California and U.S. Rep. John Katko of New York, is a strong bill and if passed, would protect our bus members.

“It will require that bus companies develop risk-reduction programs, and not only do they have to develop them, they have to do it with their bus drivers and union representatives,” Risch said.

The programs would target areas on bus properties where safety could be improved, such as fixes for the vehicles, and de-escalation training, Risch said.

Class I railroads received millions, if not billions of dollars back when the Tax Cut and Jobs Act cut the U.S. corporate tax rate last year. Risch reminded attendees what the railroads are using the money for rather than infrastructure and maintenance.

“They’re using it to buy back stock — elevate the stock price. Who are the biggest stockholders? — Top officers of the railroads and the hedge funds,” Risch said. “Those are the guys that are profiting. Union Pacific will spend twice as much money these next three years buying back stock than they will in investing in the railroad.”

The runaway debt that has been created by spending increases also has politicians eyeing what they describe as “entitlements” — among them Social Security, Medicare, Medicaid and Railroad Retirement. Politicians want to get their hands on the money that fund these “entitlements” – money that we’ve put in for our retirements – and bankrupt these programs.

“That’s the deal we’ve made — we’re going to pay in for 30, 40 years and then we would have a few years to enjoy retirement because we invested,” Risch said. “That was the deal — it was a pension plan. You can’t change that. We’re not going to stand idly by if they try to change that deal.”

Thanks to all of you who helped in our Get Out the Vote Campaign. Your generosity with your PAC contributions, emails and direct mail efforts, volunteer phone calling, door knocking, and your conversations with friends and fellow members made a difference in many races. Even where our endorsed candidates didn’t prevail, your efforts were not in vain. Rather, it showed that we were engaged and that we are an organization that supports those that support us.

Clearly the results from Tuesday’s elections were not what many of us had hoped. We lost some good friends like Rep. Nick Rahall (D) in West Virginia and Sen. Mark Pryor in Arkansas (D).

Now our job begins to build relationships with the newly elected members of Congress, whether they are Democrat or Republican. Anthony Simon, our Long Island Rail Road general chairperson, has already reached out to two newly elected Republican congressmen in New York and is setting up introductory meetings.

Special thanks go to Dean Mitchell, our GOTV coordinator, for his hundreds of hours of work on direct mail pieces, robocalls and polling. He worked with our legislative boards to make sure our members were informed as to why we endorsed the candidates we did and helped with early and absentee voting.

Dean also helped with polling and direct mail that made a big difference in the re-election of two good Republican friends, Reps. Chris Gibson and Michael Grimm, both of New York.

Thanks also goes to Phillip Qualy, our Minnesota state legislative director, and his team, that did a phenomenal job of holding back a tough challenge against our friend, Rep. Rick Nolan (D), a member of the House Transportation and Infrastructure Committee.

There is no escaping the reality that the incoming Congress will be less supportive of issues important to our members than the existing Congress. It will be harder to pass a two-person train crew bill and it will be harder to secure adequate funding for Amtrak, transit, essential air service and the National Mediation Board.

This simply means we have to work harder to make our case for all of these things. A first step is for our state legislative directors to meet with the newly elected members and make the case for issues that are important to us.

We don’t have the power to win political elections on our own and this election proved that. What we do have is an obligation to work hard and do the best job that we can for our members. That’s my plan moving forward. With the help of Greg Hynes, our alternate national legislative director, our staff and our state legislative boards, we can protect the interests of our members just as our union has done for more than 100 years.