Conductors assaulted on trains. Employee facilities that are filthy and infested with rodents. A culture where “an on-time train is better than a safe train.”

An New Jersey Transit union official said Tuesday (April 8) there is no culture of safety at the statewide transportation agency.

“We just go about our work every day and we’re not told anything — nobody ever talks to us about safety,” Michael J. Reilly, general chairman with the United Transportation Union, said during the monthly NJ Transit board meeting in Newark.

Read the complete story at NJ.com.

The head of New Jersey’s transit agency Feb. 3 defended the response to delays for thousands of fans leaving the Super Bowl by train, as officials sought to understand how ridership estimates could have been so far off base.

About 33,000 people took the 7-mile ride between MetLife Stadium and the Secaucus rail transfer station, more than double the highest estimates made by organizers and transportation experts before the game. The overcrowding on the platform grew so severe immediately following the game that the stadium scoreboard flashed a sign asking fans to remain inside.

The Super Bowl was held Sunday, Feb. 2, at Met-Life Stadium in New Jersey. It was billed as the first outdoor/mass transit Super Bowl.

“I received an email this morning from New Jersey Transit Vice President and General Manager Kevin O’Connor, thanking our UTU/SMART members for a job well done,” said New Jersey Transit General Chairperson Michael J. Reilly. “Our members of Local 60 in Newark, N.J., came out in force, as there were more than 70 extra assignments to be filled on both Saturday and Sunday. Not only did they come out, our crews were exceptional in their duties and professional in very demanding situations.”

In a message to Reilly and Brotherhood of Locomotive Engineers and Trainmen General Chairperson Dave Decker, O’Conner wrote: “Just wanted to express my thanks to both of you, as well as to your members. We filled virtually every job on Saturday and Sunday and on Sunday carried an unprecedented 28,000 people to the Meadowlands and took out over 32,000. I spoke to many employees as I saw them on Saturday and Sunday and thanked them for their efforts, but of course that was only a fraction of the work force,  so please pass this on to everyone.

Great job by all and greatly appreciated. Thank you. 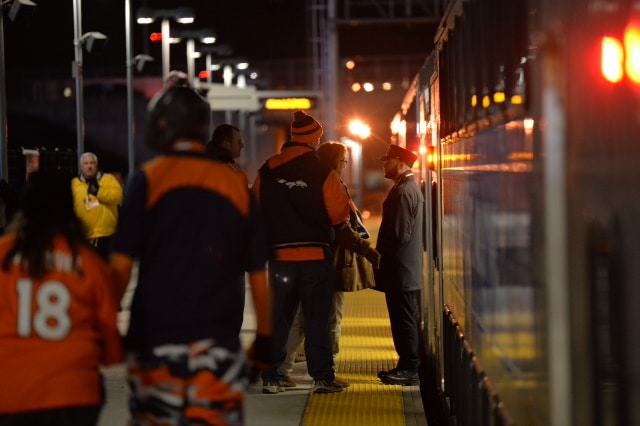 A New Jersey Transit conductor greets travelers outside a train after the Super Bowl. 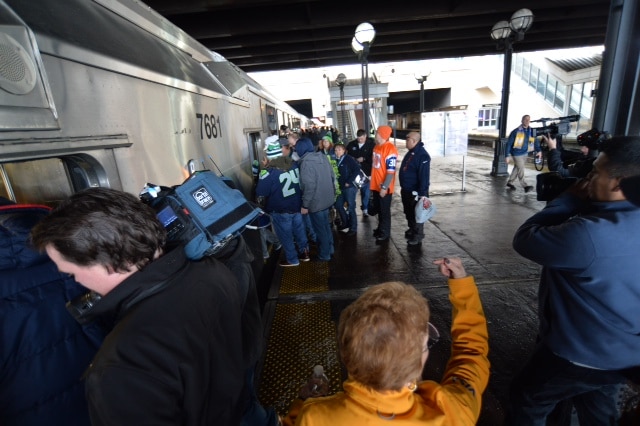