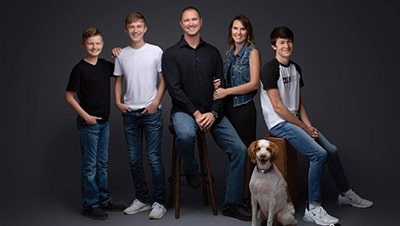 SMART Transportation Division Local 934 member Curtis A. Deines, 52, a member of our union for more than 20 years, died before dawn on the morning of March 19 after the SUV he was being transported in was involved in a head-on collision with another vehicle on U.S. Highway 2 near Ravenna, Neb.

The driver and three other rail workers in the SUV that Deines was riding in were transported for treatment, as was the driver of the other vehicle involved in the accident, according to the Star-Herald of Scottsbluff, Neb. Deines passed away at the scene of the accident, the Buffalo County Sheriff’s Department stated in an accident report.

“He will be greatly missed here in Alliance,” said Local Chairperson Wendie Henderson of the Nebraska local.

Born in Torrington, Wyo., Brother Deines was a hall-of-fame athlete from his time as a center on the Chadron State College football team. He graduated college in 1996 with a degree in education.

He then entered into service with the Burlington Northern Santa Fe Railroad in the maintenance of way department and then transferred into train service as a conductor.

Great sources of pride and joy for him were watching his son, Colin, and daughter, KayLeah, succeed in life and becoming a grandpa, his family wrote in his obituary.

“Curt was loved by all and will be greatly missed for his big heart and infectious laugh,” his family wrote. “The role Curt played in each of our lives will never be forgotten.”

Brother Deines is survived by his wife, Sonya; his son, Colin Deines, and Colin’s girlfriend, Catie Williams; daughter, KayLeah King, and her husband, Robert; two grandchildren; his parents; his sister, Staci John, and her husband; two nieces; and a number of in-laws and other relatives.

A private memorial service is scheduled for March 27.

Click here to view Brother Deines’ full obituary and to leave condolences for the family.

The funeral home is accepting memorial donations in lieu of flowers. Checks can be made out to Sonya Deines and mailed to Chamberlain Chapel, 1700 Hwy. 20, Chadron, NE 69337. Online donations are also being accepted through a Go-fund-me page that has been set up to help out the family financially.

SMART Transportation Division joins in mourning Brother Deines and offers its sincere condolences to his family and friends, his union brothers and sisters in Local 934, and to all who knew him.

A Local 1544 (Maywood, Calif.) member lost his life as a result of injuries while performing service early March 3.

He had been a member of our union since July 2013 and was a conductor for BNSF.

A member of the SMART-TD National Safety Team is assisting the National Transportation Safety Board, which has launched an investigation into the accident.

Brother Ellis is the first on-the-job casualty of 2021 for our union. Last year, four of our members died while in service. He is survived by his wife, Trinity, and children.

An online fundraiser has been established by fellow Local 1544 member Jimmey Diaz during this time of loss for Brother Ellis’ family.

“There are no words to describe how we are all feeling at this moment,” Diaz wrote on the GoFundMe page. “The smiles and laughter will forever be remembered my friend.”

The SMART Transportation Division offers its sincere condolences to Brother Ellis’ family, his Local 1544 brothers and sisters and all those who knew him.