SMART Transportation Division Local 61 (Philadelphia, Pa.) has experienced the loss of a second member from the novel coronavirus.

Brother Stephen McFadden, 51, of Philadelphia, and a SEPTA conductor, died April 30 from COVID-19. He had been a member of the union since September 1991.

“I saw him at every union meeting we had – and sometimes he was the only person there,” said Bernard Norwood, general chairperson of GO-STA. “Stephen was very committed to the union. He was a really nice guy.”

Using money out of his own pocket, Brother McFadden donated to the local’s annual holiday party without fail, Norwood said.

McFadden was a very passionate Phillies fan – sometimes catching part of the game during the down time he had during a shift and filling in his union brothers and sisters on what was going on – and making sure the game was on the TV in the crew room. He also was a very particular lottery player, schooling people to scratch from the bottom up and letting them know the range of numbers they should snag when considering a scratch-off ticket purchase.

Another tradition he was known for was on pay weeks – when the system processed the payroll and employees knew they were going to get their deposits, he’d greet his brothers and sisters with a cheery “Happy Wednesday!”

“That’s going to be missed a lot, especially today,” Norwood said. (He was interviewed on May 6 — a Wednesday morning.)

On April 14, McFadden’s Local 61 brother Michael A. Hill, 58, of Glassboro, N.J., died of COVID-19. Norwood says he’s received reports of 35 positive coronavirus cases and 135 SEPTA workers have been in quarantine. Seventy-two are back on the job.

Norwood said it’s been an uphill fight to get the carrier to mirror some of the sanitizing practices being adopted in New York and in New Jersey, to provide personal protective equipment and to adhere to Centers for Disease Control and Prevention measures.

“We’re still fighting for temperature checks and to get marks on the floors for social distancing,” Norwood said, although he said he’s seeing some progress.

To date, SMART-TD nationally has lost at least eight members and retirees to the pandemic, according to reports submitted to the union.

Brother Hill was a 30-year member of SMART-TD and worked for the Southeastern Pennsylvania Transit Authority (SEPTA). He is the second active member fatality for SMART-TD from the virus following New Jersey Transit conductor Joseph Hansen, whose death was reported a week ago.

SMART Transportation Division President Jeremy Ferguson called General Chairperson Bernie Norwood to offer the condolences of all of SMART to the Hill family and Local 61. General Chairperson Norwood relayed to him that “Brother Hill was a great member that was no nonsense and always had a smile on his face. He really enjoyed being with his co-workers, attending football games for the Philadelphia Eagles and playing cards. Brother Hill will surely be missed.”

General Chairperson Norwood was also thankful for the assistance of UTUIA Field Supervisor Chris Malley, who is working with the family to ensure the fraternal UTUIA life insurance benefits Brother Hill had are handled quickly.

Brother Hill was on the front lines moving passengers as an essential employee and was doing so without all the Personal Protective Equipment (PPE) that should have been provided by SEPTA. As news of this second fatality reached him, Ferguson participated in an AFL-CIO-hosted conference call to news media April 15 taking to task federal agencies that he said have not gone nearly far enough in protecting workers during the coronavirus pandemic, even as our union’s death toll from COVID-19 increases.

The union has sent letters to the Federal Transit Administration (FTA) and the Federal Railroad Administration (FRA) seeking emergency orders that establish definitive regulations to protect employees. The FRA has only issued a safety advisory when they have the power to regulate, while FTA Acting Administrator K. Jane Williams did not even respond to a letter sent by SMART-TD, which is a slap in the face to labor, President Ferguson said during the call.

“I’m appalled that we can’t even get a response. It is not like we are asking for anything extravagant. Just what the CDC has stated is the bare requirements to ensure a safe work environment for both our members and the general public that use these services.” Ferguson said. “It’s paramount that we get this fixed at all levels of transportation, and quickly. Enough is enough.”

Twenty two months ago, SMART Transportation Division Local 61 (Philadelphia, Pa.) train service members working at SEPTA ratified their contract from the previous round. Now, for the first time in recent memory, these same members have ratified a new agreement governing the rates of pay and working conditions of conductors and assistant conductors on that property prior to their next scheduled wage increase. A vast majority of those voting, 87 percent, voted to ratify the agreement. The short-term pact runs through June 4, 2017 and includes general wage increases, increased instructor allowance, increased uniform allowance and same sex spousal benefits amongst its provisions.

Transportation Division Vice President John Lesniewski, who assisted with negotiations, expressed his gratitude to General Chairperson Bernard Norwood, as well as his negotiating committee consisting of Vice General Chairpersons A. J. Bright, Michael Stevens, Raymond Boyer and General Secretary Nelson Pagan for their professionalism, tenacity and commitment to finding an equitable agreement in a timely manner for the benefit of our Local 61 members. 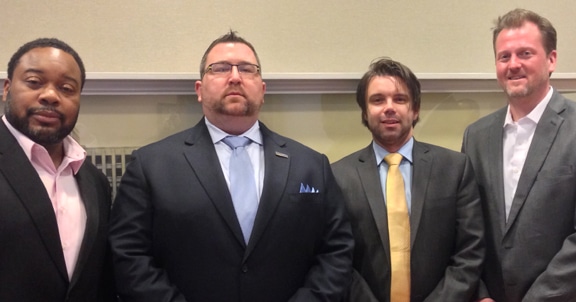 The agreement calls for wage increases totaling 11.5 percent over the five-year life of the contract that are similar to increases the carrier agreed to with the Transport Workers Union in 2009. TWU represents bus and subway operators and mechanics employed by SEPTA.

Local 61 Treasurer Elliott D. Cintron said contract ballots, which have been mailed to all affected members, will be tabulated after April 24.

The tentative agreement must also be approved by SEPTA board members.