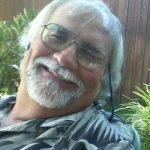 A SMART Transportation Division member was seriously injured and a BLET engineer was killed when a taxi hired by Union Pacific Railroad to transport the men rolled off the side of a freeway near the Interstate 680/Interstate 80 interchange, according to the California Highway Patrol.

The accident happened just after 1 a.m. this morning (March 17) in Fairfield, Calif.

Moffitt is a member of Transportation Division Local 1570 at Roseville, Calif.

The taxi was transporting the two UP employees from San Jose to Roseville.