“My daughter and her friend work for Grub Hub and live off tips,” said Donna, “and they live with me because there is no way that they can afford to live on their own.”

Donna’s story hit me hard and here is why. 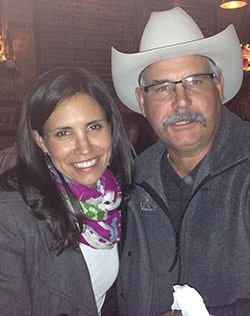 Adrienne McCauley provided this photo of herself and her father, Kelley, a former UTU/SMART TD member, who was able to provide for his family thanks in part to union protections.

My dad made a choice at 18 that if he was going to make a decent living, he could never do so off our family’s struggling cattle ranch in Arizona. So he hired out on the railroad, and with that he joined a union.

The first 15 years of Dad’s career were rocky. He was often laid off, sometimes for six months at a time (priority in scheduling went to railroaders with more seniority). Then Mom would get a job, Dad would create a side hustle — working for his father’s plumbing business, hauling freight in a semi-truck, working the family ranch, selling pipe for corrals as I remember — and my parents would nervously piece together their $250 weekly meager income to cover their bills for a family of five.

As the years went on, Dad rose in the ranks. With more seniority, he gained more “trips,” and in time our family financial picture changed enough for us to gain our place in the middle class. Just this year, Dad retired with a generous employee-sponsored pension and a halfway-decent 401(k).

Life would not have even existed for me if it were not for my father belonging to a union that was powerful enough to fight for our family. Union benefits that insured a hospital stay and a respirator for a month while my premature-baby lungs developed both saved my life and did not bankrupt us.

Even as my extended family was counting down the months leading up to my father’s retirement, the picture for most American workers became much bleaker. The bubble of decent union jobs in my railroad hometown are now an anomaly. Just 10% of American salaried and hourly workers are in a union today and even they are under attack from everyone from the White House to the state houses to the Supreme Court.

When I was a freshman in high school, a family driving in a Ford Fiesta on a rural road crossed the railroad tracks just a couple miles in front of the train my dad was operating. The mile-long train was going 70 mph, and while he pulled the brakes, there was no way to stop the 4,000 tons of cargo from sliding across the rails. The tiny car was stuck. As the train brakes shrieked, Dad wailed. He saw the fate of the trapped family in clear view. After impact and as the train slowed down, Dad jumped out of the cab. The three adults in the car were dead, but from behind the smashed passenger seat he heard a little voice crying, “Help me!” He delicately pulled the child from the car and held him until help arrived. Dad came home that night a different person. About a week later, the little boy died in the ICU. My father was never really the same after that, nor am I as I retell his story.

Soon after the tragedy, the railroad began an investigation. There was a sense of unease in our house. We knew that the train wreck was an accident, but what if Dad lost his job? With representation by the United Transportation Union (now SMART Transportation Division), he attended numerous hearings to testify in his case. He also attended counseling for PTSD. Over the course of several weeks, my father, Kelley McCauley, was cleared of any wrongdoing and returned to work without being penalized.

But this kind of employee protection in the USA is dying. We are now tied with Malaysia in being the easiest places in the world to terminate employees. Furthermore, we are pushing out stable jobs with the expansion of “alternative work arrangements,” like that of Donna’s daughter and her friend. According to federal employment numbers, the U.S. economy grew 94 percent from 2005-2015 — not in union jobs but in freelance and subcontractor jobs, with temp agencies, and in what is hilariously yet tragically called “the gig economy.” There is a straight line from the decline of unions to the rise in crappy jobs. Union members do not have “gig” jobs.

Back in October, I traveled home for Dad’s retirement party in Arizona. As we gathered in the American Legion Hall, half of those in attendance had been, like my dad, newly minted into the challenging club simply called “retirees.” And while my father and his colleagues have the protection of their union in retirement, the employees that follow them may not.

In January 2019, The New Republic magazine reported that Elwood, Ill., (population 2,000) near where I live and work as a community organizer with an affiliate of the Metro Industrial Areas Foundation, had been completely taken over by entrepreneurs whose “business plan” was to staff warehouses surrounding Warren Buffett’s Center Point Intermodal Freight Terminal for retailers such as Wal-Mart, Ikea, Home Depot and Amazon. Elwood was promised a bill of goods: Good jobs being the main one. Instead, the temp agencies have consistently hired people (in situations similar to Donna’s daughter and her friend) on 90-day trials, most of which never lead to full-time employment. These non-unionized workers are often “let go” and then hired for another 90 days by one of the temp agencies in Will County (which are sometimes owned by the same “entrepreneurs”). They never land that full-time job with benefits they need and crave that part of the American dream that my parents achieved.

Here is what makes me so angry: The same railroad that my father just retired from is the same railroad that stops at Warren Buffett’s Intermodal Freight Terminal in Elwood, loading and unloading large heavy freight cars, running back and forth across warehouses the size of five football fields, and then driving it to our house — in two-days or less — for our personal convenience. And many of us think that is great! It’s not great. It is wrong. Period.

Marilyn Robinson in her book, The Death of Adam, writes that worker protections, the two-day weekend and the living wage with benefits were “largely willed and reformed into existence” following the carnage of slavery and the Industrial Revolution. Is another revolution needed to help us see that our instant consumer gratification has a human cost? Is another revolution needed to stir the imagination of American workers to see the inherent value of organizing and collective bargaining?

I personally believe so. I think you do too. Let’s do something about it.

Adrienne A. McCauley is lead organizer for DuPage United and the Fox River Valley Initiative in the Chicago suburbs and exurbs of Illinois which are fiercely non-partisan, institutionally based, relational-power affiliates of the Metro Industrial Areas Foundation (IAF). Her father is a retired member of SMART TD Local 113 in Winslow, Ariz.

According to Gallup, 61 percent of adults say they approve of labor unions. This is the highest approval rating unions have had since 2003 when approval was at 65 percent. Approval is up five percentage points from last year’s poll and is 13 points above the all-time low in 2009.