“We have an ambitious agenda focused on job creation and economic recovery, and Right to Work legislation is not on that list. After discussions with other leaders and my caucus, I don’t believe there is current support for this issue in the General Assembly,” Faber said. “The only purpose this discussion serves right now is to generate a bunch of breathless fundraising appeals from the Ohio Democratic Party.”

Ohio has joined Pa. and Mo. in the fight against right-to-work bills. Today, two Republican Ohio Representatives Kristina Roegner and Ron Maag submitted bills seeking to take away rights from unions and their members in Ohio.

Roegner’s bill goes after private-sector unions such as UTU-SMART while Maag’s bill focuses on unions of the public sector.

Ohioans are clearly against this type of legislation with 60 percent of Ohio voters having voted down similar legislation in Senate Bill 5 (SB 5) that was introduced in 2011. SB 5 almost cost Ohio Republican Governor John Kasich his job when he sought to make SB 5 law without allowing Ohioans to vote on it. Petitions and outcries were heard loud and clear in Ohio’s government and SB 5 went to the people to be voted on in November 2011 and was voted down.

Ohioans are still working on getting an amendment passed that would allow the people of Ohio to vote to remove a governor from office as a result of the SB 5 fiasco.

Kasich has refused to support any right-to-work bill since SB 5 failed and has instead remained focused on other legislation. Kasich has yet to weigh in on the new legislation that was introduced today.

Pennsylvania and Missouri are also facing similar bills in their respective Houses. Recently, the state of Maine rejected right-to-work bills in both the state House and Senate, effectively killing those bills. 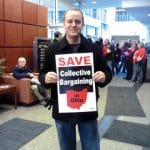 Voters in Ohio overwhelmingly restored to public employees Nov. 8 their collective bargaining rights that a conservative majority in the state legislature – with support from Gov. John Kasich — chose to revoke earlier this year.

The mean-spirited legislative attack on collective bargaining rights was so repugnant to Ohio citizens that 1.3 million affixed their signature on petitions to place the law on the November general election ballot – a rare and not lightly taken action of direct democracy.

By nearly a two-to-one margin, Ohio voters overturned the law, sending it to the dust bin of political history, along with a strong message to conservative lawmakers that they best not again seek to trash workers’ rights to collectively bargain for wages, benefits and working conditions.

The UTU Collective Bargaining Defense Fund played a meaningful role in overturning the law, with active and retired UTU members in Ohio helping to organize public demonstrations, circulating petitions to place the law on the November ballot, and assisting in voter registration and get-out-the-vote drives that involved knocking on doors and providing rides to the polls.

The phrase repeated to Ohio voters a million times over by UTU volunteers was, “Don’t let others decide your future.”

UTU Ohio State Legislative Director Glenn Newsom spent months visiting locals and directing mail and phone messages to active and retired UTU members about the importance of voting and encouraging others to vote for repeal of the law.

This was the second victory for the UTU Collective Bargaining Defense Fund. In July, two anti-labor senators, who had voted in favor of a law similar to the one in Ohio, were removed from office in Wisconsin following a recall effort with strong UTU participation. Democrats and union leaders there now hope to channel momentum from the Ohio victory into an effort to recall Wisconsin Gov. Scott Walker.