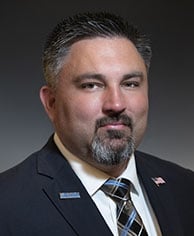 Brother Cassity is one of six new surface transportation industry leaders appointed to STSAC and the lone labor representative on the committee.

“These new members bring significant experience in surface transportation and add particular expertise in pipeline operations and cybersecurity to the committee,” said TSA Administrator David Pekoske. “As an agency, we work to remain steps ahead of evolving threats, and I anticipate the experience these professionals bring to the committee will help us.”

“I’m proud to serve on the committee and honored by this appointment,” Cassity said. “I will give honest and constructive recommendations to TSA as we work to make surface transportation in the nation safer, especially with the many transformative opportunities presented by the Biden administration’s Infrastructure Investment and Jobs Act.”

Congratulations to Alt. NLD Cassity for receiving this important role!

“I have the utmost faith that Jared has the knowledge, experience and passion to lead this team,” Gibson said.

No stranger to the NST, Cassity joined the team in 2014 and served as an alternate director from 2016 to 2019. He has also served on the CSX Safety Model Executive Board.

“Safety is our priority, as it should be, but unfortunately we work in an industry that prioritizes profit before anything else. So, we must be vigilant to not just watch out for ourselves, but also to protect the backs of our brothers and sisters,” Cassity said. “As a union, we cannot let down our guard, and I pledge to maintain the necessary level of dedication and aggression that this job requires to get the job done.

“Our goal is simple: ‘to get you home the same way you came to work.’ I know that is an old saying, but it’s true. The safety of our brothers and sisters is worth fighting for, and the NST will do just that. Lastly, I would like to thank Brother Jerry for all the years he has dedicated to this team. What a difference for the better he has made.”

Brother Gibson hired out in 1996 as a conductor for CSX. In 1998, he was voted as terminal safety chairperson, serving in that position until 2000. That same year, he assisted with the formation of a new safety process and authored what became the UTU/CSX Safety Program in February 2000. He also led the training of safety coordinators on CSX and was responsible for employee safety, unsafe condition and procedure correction, accident investigation and prevention. He’s also served the union by presenting safety and legislative courses at regional meetings.

A nationally recognized safety expert, Gibson has met with authorities from all federal and state executive and legislative branches and has provided testimony and information in regard to railroad-related issues pertaining to safety and job retention. He has been a co-director of the NST since 2013. Although stepping down as co-director, Gibson will remain acutely engaged to consult on safety matters.

“Safety has always been a passion of mine and something I worked diligently to improve my entire railroad career. I have always believed that, as a fraternal organization, the safety of our fellow brothers and sisters must top all other priorities as one loss or injury is one too many. I know with the leadership and commitment to safety President Ferguson and General President Sellers have, and the skills and ability Jared possesses, this team will receive the support it needs to be successful, therefore, the time was right to hand over the baton. While I am stepping back, I am not walking away and will always be a resource and advocate … willing to assist at any time,” Gibson said.

To help combat the spread of misinformation concerning the Investing in a New Vision for the Environment and Surface Transportation (INVEST) in America Act, Alternate National Legislative Director Jared Cassity has provided the following facts regarding the two-person crew provision in the bill.

The INVEST Act, as written, requires a certified locomotive engineer and certified conductor on most freight trains. According to the bill, there are instances that a train may be operated with a reduced crew. Exceptions are listed below:

A freight train may be operated with a reduced crew, if:

In addition to the above, a train may be operated with a reduced crew, if:

A TRAIN MUST BE OPERATED BY A TWO-PERSON CREW (NO EXCEPTION), IF:

The INVEST Act is poised to be the most significant piece of rail-related legislation this generation of railroaders has seen since the passage of the Federal Railroad Safety Act of 1970. 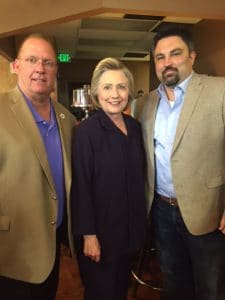 On May 2nd, SMART TD Kentucky State Legislative Director Jared Cassity and SMART TD Vice President Doyle Turner participated in a round table discussion in Ashland, Ky. with presidential candidate and former Secretary of State Hillary Clinton. The Lexington Herald Leader reported that Clinton promised federal assistance for Eastern Kentucky, which has been negatively impacted by job losses in steel and coal industries. Read the entire story here. A complete video of the meeting, by The Daily Independent, can be found on facebook here.