CSX CEO E. Hunter Harrison, 73, has died just two days after CSX announced that he was going on medical leave due to complications from an illness.

CSX’s chairman of the board of directors, Edward J. Kelly III said on behalf of the board: “With the passing of Hunter Harrison, CSX has suffered a major loss. Notwithstanding that loss, the board is confident that Jim Foote, as acting chief executive officer, and the rest of the CSX team will capitalize on the changes that Hunter has made. The board will continue to consider in a deliberative way how best to maximize CSX’s performance over the long term.” 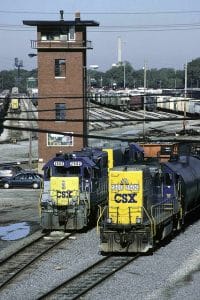 CALGARY – The CEO of Canadian Pacific Railway says he’d like to see Canada and the United States work together on rail regulations – though he admits it may be difficult to pull off.

The company is trying to talk to regulators in Washington and Ottawa about how the lack of consistency is hurting business, Hunter Harrison said Thursday (May 1).