He touched upon the topics of assault upon workers, Amtrak funding and having a labor member on the carrier’s board. 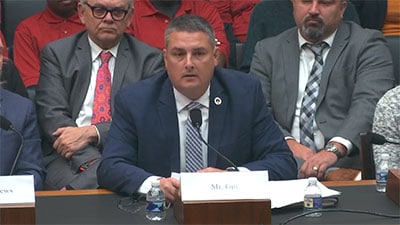 Guy called for Congress to increase the level of appropriations reserved for Amtrak so that the carrier can go forward as an important part in the groundwork of a multimodal transportation system in the United States.

“Congress should allow Amtrak to be America’s railroad and support their ability to maintain a qualified workforce that meets customers’ demands now and well into the future,” Guy told representatives on the subcommittee.

He said steps taken by legislators in the FAST Act, including the addition of three grants administered by the Federal Railroad Administration, have helped to increase momentum for improving Amtrak’s service.

“These grants are successful, and they work.”

But operationally, there are areas of concern — Guy urged representatives to preserve and protect Amtrak’s long-distance service, which had been in jeopardy of being axed last year — especially the Southwest Chief route — before legislators stepped in.

On the administrative side, Guy said the Amtrak Board of Directors should have a member from labor on it, mirroring what the Railroad Retirement Board does, Guy said. Often, the experiences of SMART TD members and other unionized workers who keep Amtrak running day to day can be enlightening on what to do and what not to do when running the railroad, he said.

“Passengers interact with our members on board trains,” Guy said. “We hear concerns and complaints … having a labor member at a board level will help Amtrak make decisions that could affect service.”

Guy said employees also are not given enough resources to deal with violence against them. Carrier-provided protections for Amtrak’s rail workers such as de-escalation and self-defense training aren’t there, he said, and neither is counseling after an incidence of violence occurs. SMART TD brother Michael Case was shot in 2017, and the incident spurred the introduction of legislation to treat the punishment of transit worker assaults the same as those perpetrated on airline workers.

Guy was one of three labor representatives who discussed the carrier’s relationship with labor. Over the past year, Amtrak has engaged in what has been described by some as “union busting” behavior, especially as it concerns cuts to the jobs of unionized call-center and food-service workers, police officers and rural station agents.

“When you are reducing the workforce that’s in charge of inspections and fixing equipment and whatnot, it makes it hard to keep things in a state of good repair, regardless if new equipment is coming,” Guy said. “I wouldn’t want to see worker reductions to the point where safety is jeopardized. We don’t think it is, but that’s a path we wouldn’t want to see.”

“Amtrak clearly has decided that the way to prosperity is to have its workers pay for it,” Lipinski said. “This is not the way to run this railroad.”

Among the cuts were about 500 jobs at a call center in Riverside, Calif. About 350 of those jobs were later brought back at non-union sites.

“Amtrak used to be an enviable place to work,” said Jack Dinsdale, national vice president of the Transportation Communications Union, in criticizing the loss of those union jobs. “It was about union busting, period.” 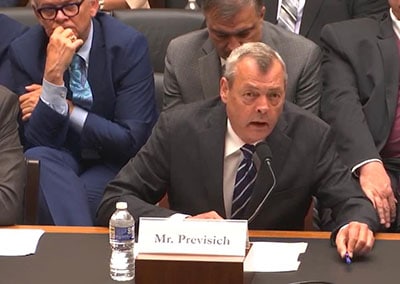 SMART Transportation Division President John Previsich appeared before the U.S. House Subcommittee on Railroads, Pipelines, and Hazardous Materials to testify on the state of the railroad workforce.

Rather than use his prepared written testimony, he delivered a statement in response to the testimony given earlier in the hearing by Federal Railroad Administration Administrator Ron Batory. In his statement, President Previsich told the representatives about issues crucial to the rail labor workforce, including what he described as FRA’s “abdication” of its safety oversight duties in the wake of its withdrawal last month of the Notice of Proposed Rulemaking regarding a minimum train crew size.

He also addressed questions posed by subcommittee members on subjects including Congress’s role in helping to ensure a safe working environment for rail workers, the national Safe Freight Act two-person crew legislation and the role of technology, including automation, and its effects on the rail labor workforce.

A video of President Previsich’s testimony and responses is embedded below.

Video of the full hearing containing President Previsich’s testimony as well as that of other railroad labor leadership in attendance is available here on YouTube.

In a state-of-the-union speech uncharacteristically short on laundry list projects and policies, President Obama Tuesday night conspicuously singled out high-speed rail as “the most reliable way to move people,” saying that “within 25 years, our goal is to give 80 percent of Americans access to high-speed rail, which could allow you go places in half the time it takes to travel by car.

“For some [high-speed rail] trips, it will be faster than flying — without the pat-down,”said the president. “As we speak, routes in California and the Midwest are already underway.”

The White House press office said the president will release more details on his desires for high-speed rail, transit and Amtrak improvements when he delivers his fiscal-year 2012 budget request to Congress in early February.

“Countries in Europe and Russia invest more in their roads and railways than we do,” said the president in his state-of-the-union speech. “China is building faster trains … We have to do better. America is the nation that built the transcontinental railroad.”

Many Republicans, however, have signaled they will oppose Obama’s high-speed rail spending proposals and also seek to reduce federal subsidies for Amtrak during congressional budget deliberations.

However, the chairman of the House Rail Subcommittee, Bill Shuster (R-Pa.), indicated he is not opposed to more spending on high-speed rail and Amtrak, but has reservations. Shuster said:

“The Obama administration’s high-speed rail grants, rather than focusing on a small number of projects with the most potential for success, have been spread among numerous projects. Most of these have been grants to Amtrak, and nearly all are slower-speed rail projects.

“In addition, the administration has virtually ignored the one region of the United States where high-speed rail makes the most sense and would have the most national benefit — the Northeast Corridor between Washington, New York and Boston. Amtrak’s Acela currently serves this route, but at an average speed of only 83 mph.”

And Rep. John Mica (R-Fla.), chairman of the subcommittee’s parent, the House Transportation & Infrastructure Committee, has voiced support for more high-speed rail funding in the Northeast Corridor and for a limited number of high-speed rail projects — but with a caveat: private sector investment in addition to federal funding.