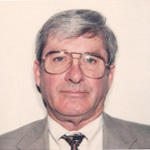 Plourd retired in 1997 as a member of UTU Local 1400 (South Portland, Maine), following 43 years of membership in the UTU and its predecessor, the Brotherhood of Locomotive Firemen & Enginemen.

A Marine Corps veteran, Plourd served as a member of the University of Maine Labor Education Committee and a member of the New England Regional Commission Task Force on Capital and Labor.

Former UTU International President Tom DuBose recalled Plourd as “a distinguished gentleman in every respect who could be found doing the people’s business to the very end. Gene fought the battles that were required of him and had a capacity to change, a capacity to learn, a capacity to listen, and a capacity to accept life as it is rather than the way he wanted it to be,” DuBose said.

Plourd is survived by his wife, Rosemary, 10 children and 13 grandchildren.

The family asks that in lieu of flowers, donations in Plourd’s memory be made to hospice of Southern Maine, 180 U.S. Route 1, Scarborough, ME 04074; or Limerick Fire and Rescue Squad, 24 School Street, Limerick, ME 04048.