Last week, the SMART Transportation Division National Legislative Office submitted comments to the Department of Transportation (DOT) seeking input on existing rules and other agency actions that are good candidates for repeal, replacement, suspension, or modification. In our comments, we remind the DOT that many rules and regulations in the railroad industry were written in blood and that the reduction in overall accident rates are thanks to the various safety regulations issued by agencies like the Federal Railroad Administration.

Furthermore, we urged the DOT to continue to engage the Railroad Safety Advisory Committee (RSAC) for future rulemaking — a collaborative process that has been successful for nearly 20 years. Alternatively, the Association for American Railroads has called on the DOT to issue rules “based on a demonstrated need, as reflected in current and complete data and sound science; and non-prescriptive regulatory tools, like performance-based regulations…” while listing a number of existing federal requirements. We believe this approach would only undermine critical safety needs in the rail industry such as the need for two-person crews and ECP braking systems.

Here are SMART TD’s comments and comments submitted by AAR.

CLEVELAND, Jan. 20—The Brotherhood of Locomotive Engineers and Trainmen (BLET) and the Transportation Division of the International Association of Sheet Metal, Rail Air and Transportation Workers (SMART TD) are urging their respective memberships to contact members of the House of Representatives about co-sponsoring The Safe Freight Act of 2017 (H.R. 233), a bill that would mandate two-person train crews on freight trains—one certified locomotive engineer and one certified conductor.

The current two-person crew bill mirrors legislation that was introduced in the 114th Congress, which garnered 69 co-sponsors in the House of Representatives.

Now is the time to speak up and voice your support for two-person train crews! All active and retired members of the BLET and SMART TD, as well as their Auxiliary Representatives, should contact their House Representatives and ask them to Co-Sponsor H.R. 233, the Safe Freight Act of 2017.

SMART TD and BLET members: Please visit the SMART TD Legislative Action Center (LAC) where you can easily find and contact your representative and urge him or her to support H.R. 233. Click here to visit the LAC and let your voice be heard!

Members can also call the U.S. Capitol Switchboard at 202-224-3121, and ask to speak with the House of Representative member from your Congressional District. Contact information can also be found online at: http://www.house.gov/htbin/findrep.

Earlier this month, the BLET secured a significant victory for rail workers from the highest court in the United States to protect two-person train crews. On January 9, the United States Supreme Court denied a petition filed by the Wheeling and Lake Erie Railway asking that the nation’s highest court review and set aside the 2015 finding by the Sixth Circuit Court of Appeals that the railroad’s use of managers in place of union conductors was a major dispute under the Railway Labor Act.

The issue of two-person train crews has been in the national spotlight since the July 6, 2013, derailment of a Montreal, Maine & Atlantic (MM&A) oil train in Lac-Megantic, Quebec, which killed 47 people and destroyed the center of the town. The MM&A train was crewed by a single person. Since that time, there has also been movement by major freight railroads to seek collective bargaining agreements to allow for widespread use of one-person train operations. SMART TD and BLET have lobbied to protect two-person crews as being paramount to safety.

“The nationwide fight over operating crew size is far from over, and we are urging all BLET and SMART TD Brothers and Sisters to contact their member of Congress on this extremely important issue,” BLET National President Dennis R. Pierce said. “In spite of what the railroads might say, technology has not advanced to the point that it can replace the eyes and ears of railroad professionals. Please do your part as the job you save may be your own.”

“We will continue our tireless and years-long work of supporting a minimum of two crew members on all trains. An overwhelming majority of Americans from both political parties support this measure: the American people have spoken and are in favor of this bill. It is past time for our government to get on track, do the right thing and support H.R. 233. This measure is a matter of domestic safety and security for railroad workers, passengers, our cities, towns and our entire nation,” said SMART TD President John Previsich.

President Pierce and President Previsich both thanked Congressman Young for introducing the bill.

The Brotherhood of Locomotive Engineers and Trainmen represents nearly 57,000 professional locomotive engineers and trainmen throughout the United States. The BLET is the founding member of the Rail Conference, International Brotherhood of Teamsters.

The SMART Transportation Division (SMART TD) is headquartered in the Cleveland suburb of North Olmsted, Ohio. It is a broad-based, transportation labor union representing more than 125,000 active and retired railroad, bus, mass transit and airline workers in the United States. It is a division of the International Association of Sheet Metal, Air, Rail and Transportation Workers based in Washington, D.C. 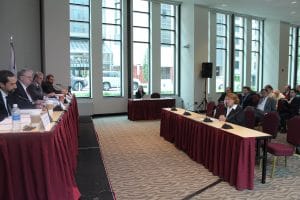 Along with Senator Heidi Heitkamp (D-ND), leaders and members of transportation unions, including TTD and SMART TD, provided compelling testimony to the FRA today, in support of a federal rule that would mandate a minimum of two crew members for all freight train operations.  Read the complete TTD press release here

SMART TD member Mike Rankin recounts his own experience for The Hill with a focus on FRA hearings being held today, to advocate closing all loopholes and enact a rule mandating that all freight trains be operated with a minimum of a two-person crew.

Amarillo.com reported that BNSF freight trains collided head-on this morning in the town of Panhandle, Texas, near Amarillo, creating a massive fireball and explosion that prompted a swift evacuation of Panhandle residents. Injuries and missing persons have been reported; at this time, no details have surfaced regarding those missing, or the number or severity of injuries. Read the complete story here.

Amarillo.com reported that BNSF freight trains collided head-on this morning in the town of Panhandle, Texas, near Amarillo, creating a massive fireball and explosion that prompted a swift  evacuation of Panhandle residents. Injuries and missing persons have been reported; at this time, no details have surfaced regarding those missing, or the number or severity of injuries.  Read the complete story here.

Federal investigators are placing the blame squarely on Union Pacific Railroad for their lack of track maintenance as the cause of the June 3rd fiery derailment that resulted in a mass evacuation as 42,000 gallons of crude oil spilled into the small town of Mosier, Oregon. Read the complete story here.  Photo courtesy of Silas Bleakley, KOIN 6 News. &nbsp; &nbsp;