In an interview with Trains.com, E. Hunter Harrison, the new CEO of CSX, recently stated that he is not a fan of one-person crews. Translation: he supports two-person crews. Read the entire interview.

The Pittsburgh Post-Gazette reported that with the help of a $20 million dollar state grant, Norfolk Southern (NS) will develop a second freight route through Pittsburgh, Pennsylvania, that has the capability of supporting double-stack freight cars. The project has been in the works since last June, when a landslide from Mount Washington closed NS’s double-stack line for nearly two weeks. The second, alternative line will now exist as a backup line. A portion of the funds will be utilized for railroad bridge repair in the area.
Click here to read more.

NORTH PLATTE, Neb. –  The North Platte Telegraph reported that of the 4,600 Union Pacific Railroad (UP) workers that were furloughed in April of 2016, nearly 3,000 of those workers have been rehired. The jobs that were cut last year were mostly train, engine and rail yard positions.

The article also included a link to new rail jobs at UP, also based out of North Platte. Click here for more information. To read the complete article, click here.

“Despite our best efforts, collective bargaining with the major U.S. Class 1 railroads completely stalled late last week. Therefore, pursuant to the terms and conditions of the Railway Labor Act, we have today applied to the National Mediation Board (NMB) for the assignment of a federal mediator to assist in our negotiations.” Read the complete press release here.

In an op-ed piece recently published in thedickinsonpress.com, John Risch,  native North Dakotan and freight rail operator for more than thirty years, makes the case that the Dakota Access Pipeline is not needed to transport crude oil, as freight rail infrastructure is already in place.

Risch stated that transporting crude oil via rail is safer than underground pipelines, and would put furloughed rail workers back to work.  “We are currently only shipping 3-4 oil trains a day out of North Dakota and we have the capacity to ship 100 trains a day with our state’s 21 oil train loading facilities,” Risch stated. Read the complete article here.

As reported in E&E’s ClimateWire, a Houston-based, billion-dollar coal plant will soon have the largest carbon dioxide “capture and sequestration” system ever constructed within an existing coal plant.  The new technology will prevent carbon dioxide emissions from seeping into the environment through a sophisticated “capture system, which will filter out 90 percent of the carbon dioxide, along with particulates, sulfur oxides and nitrogen oxides.”  The project is on schedule, and the system is slated to be up and running by the end of this year. Read the complete article by E&E reporter, Umair Irfan, here.

For those of you who don’t know me, I’m honored to serve as your elected National Legislative Director. I came from the ranks, starting in the track department on the Burlington Northern and went into train service, spending more than 30 years in freight and passenger service in North Dakota.

My father was a truck driver and my mother was a stay-at-home parent who raised three children and a cousin of mine. We grew up poor, which gave me a real appreciation for the pay and benefits that a good union job provided. My 30-plus years working on the railroad has given me a real perspective of the issues we face, and drives me to protect what we already have and work to make our jobs better.

The outcome of the Presidential Election will determine whether we make progress on improving our jobs or whether we lose ground.

The next president of the United States will set the tone, and will make important appointments to positions that directly affect you.

The head of the Federal Railroad Administration will decide:

Appointees to the National Mediation Board will intervene in our contract negotiations and influence things like wages and work rules. They will also appoint arbitrators who decide if an unjustly fired member returns to work with or without back pay.

The head of the Motor Carrier Administration will decide how, or if, we will deal with the terrible problem of driver assault.

The next Chairman of the Railroad Retirement Board will determine not only how our pension is administered, but how our unemployment, sickness and disability benefits are administered as well.

I’m very concerned about Donald Trump, should he be elected as our next President. He has repeatedly said he will discard regulations and get rid of government bureaucracy. These are good sound bites and none of us want more government rules than are necessary, but when you look at the pending regulations affecting us, like two-person crews, fatigue and locomotive cameras, this rhetoric takes on a different meaning.

I have a note on my desk that says: “My most important job is to make sure that bad things don’t happen to our members.” I’m charged with the responsibility of protecting and improving the jobs of our members – an assignment I don’t take lightly. That job may be nearly impossible under a Trump administration.

Here is a book review of a recent book by Pulitzer Prize winning journalist David Cay Johnston. The book explains many of Donald Trump’s human failings. I know the hardcore Trump supporters in our ranks have by and large ignored these failings, but I cannot. I care about our hardworking members and our country, and quite simply put, Donald Trump is unqualified to serve as President of the United States.

If he is elected I’m afraid that he will appoint people to government that are equally unqualified, causing significant damage to the progress we have already made.

While I pledge to do the best I can to improve things for our members, I can’t do it on my own. I need your help at the ballot box. We’ve endorsed Hillary Clinton, she will support our union, our issues and the progress that unions have made. This is serious stuff and we all need to do our part in making our jobs better not just for us, but for those who follow. And that work starts with this election.

WHAT:
SMART TD members located in Minnesota or the Upper Midwest from all rail crafts are encouraged to sign up as soon as possible for our HazMat-DOT Train the Trainer Class.    The pay for attending and completing the week-long training class is approximately $1,050.00 from the DOT-NIEHS.

WHEN:
September 26 – October 1, 2016.  Class begins Monday, September 26 at 7:30am and concludes on Saturday, October 1st at 1:00 p.m. Lunches will be provided.  Class attendees must arrange to mark-off with their carriers.

LET US KNOW THAT YOU’VE REGISTERED:

Please let us know so we can log attendees!  Email the SMART TD Minnesota office at: mailto:sld@smart-td-minnesota.org; Or, call your SMART-TD Minnesota Legislative Board Office at 651-222-7500.
If you live in the Upper Midwest and need a hotel room, please contact the DOT-NIEHS Travel Dept. at (202) 624-6999 to make your hotel reservation.   Attendees must drive their own vehicles.  No air travel is available.

On Friday, July 15, John Risch, National Legislative Director with SMART TD, testified before the Federal Railroad Administration (FRA) in Washington, DC, in strong support of a minimum two-person crew mandate for freight and passenger trains. It may take months for the FRA board to make a final decision. Read his complete testimony here.  Front page photo: Risch at FRA hearing. 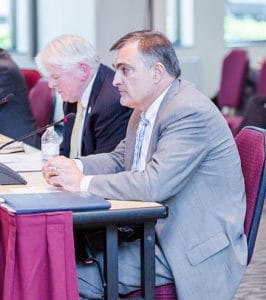 Amarillo.com reported that BNSF freight trains collided head-on this morning in the town of Panhandle, Texas, near Amarillo, creating a massive fireball and explosion that prompted a swift evacuation of Panhandle residents. Injuries and missing persons have been reported; at this time, no details have surfaced regarding those missing, or the number or severity of injuries. Read the complete story here.