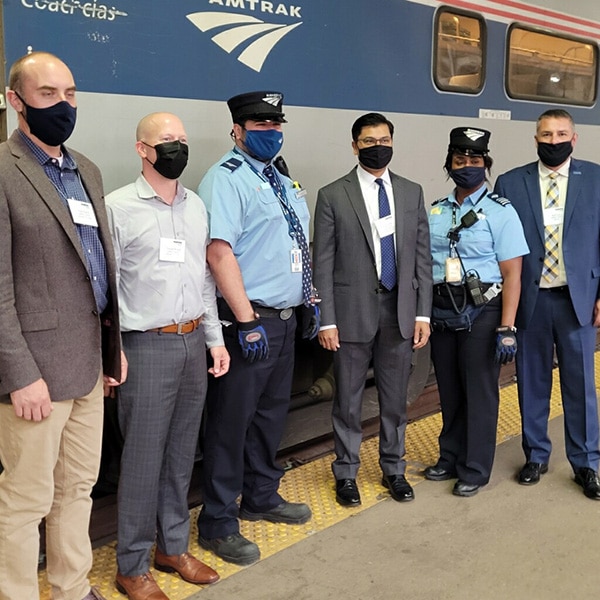 Along with Bose, the nomination of Meera Joshi to be administrator of the Federal Motor Carrier Safety Administration (FMCSA) also was advanced to the full U.S. Senate by a 22-6 committee vote. A timetable for the full Senate to consider Bose’s and Joshi’s nominations has not yet been set.

“Looking all the way through 2055, the plan addresses key corridor and investment priorities, potential funding strategies, and necessary governance structures identified by the states working with MIPRC,” Bose said. “While America’s interstate highway system and commercial aviation industry are vital and indispensable, rail can and does play a key role in our multi-modal transportation system,” Bose said. “Nowhere is that more evident than Chicago, the nation’s rail hub.”

“It was wonderful to be able to spend time with Deputy Administrator Amit Bose while he was in Chicago and on the train to Detroit as part of the MIPRC annual meeting,” Guy said. “It’s clear that he is very aware of our serious concerns and frustrations with the previous FRA hierarchy, but his openness, communication and availability to our members and our leadership are a testament to his priorities and provides a glimpse into how he values SMART-TD’s input on issues affecting our members.”

Bose also was a guest on the SMART-TD National Legislative Office’s monthly Zoom call Oct. 11 where he discussed concerns brought up by both national and state officers.

A full recap of the wide-ranging discussion that Deputy Administrator Bose had with SMART-TD officers will be published in the next edition of the SMART-TD News.

The Federal Railroad Administration on Sept. 21 sided with a SMART Transportation Division request to reject the extension of COVID-related regulatory waiver requests by the Association of American Railroads (AAR) and the American Public Transportation Association (APTA).

The waivers, initially granted in March 2020 by the Trump administration in response to the emerging coronavirus pandemic, were roundly criticized by the SMART Transportation Division at their inception. They had been extended on multiple occasions since then and covered regulations governing:

On Sept. 13, the SMART-TD National Legislative Department filed public comments in objection to the latest extension request, saying the following:

“It is hard for this Organization to grasp that the railroads are seriously concerned about the pandemic when they are doing little to nothing to prevent its spread. In fact, it seems they only want the CDC guidelines to apply where they might be most able to cut an operational corner, rather than provide a safe and sterile work environment,” National Legislative Director Greg Hynes wrote. “According to our applicable members: locomotive, crew room, and transport vehicle cleaning and sanitation has all but stopped (and has been for quite some time). Clearly, prevention of the spread of the virus has taken a back seat to waivers and relief from rules. Safety is either important or it isn’t. It doesn’t just apply here and there.”

FRA concurred with many of the points referred to by SMART-TD in its response, especially regarding training of new rail employees. The agency noted that carriers appeared to use the waivers of at least two rules for an intent outside the purpose originally sought. “FRA’s investigation of these concerns revealed that in numerous instances the railroads were utilizing this relief not to facilitate social distancing, but instead, out of administrative convenience,” FRA’s Karl Alexy wrote.

The SMART-TD National Legislative Office noted that the agency appears to be more responsive to safety concerns expressed by labor and commented on the renewed receptiveness the agency has displayed since the administration of President Joe Biden took charge at the beginning of the year.

“A change in leadership at FRA has made a difference,” National Legislative Director Greg Hynes said. “We thank Deputy Administrator Amit Bose for his agency’s thoughtful consideration of our input as they made a decision on the extensions.”

In the same response to AAR, FRA granted two other extensions to which the SMART-TD National Legislative Department did not object that covered quick tie-ups and locomotive engineer and conductor recertification timelines.

Last week, Bose appeared before the U.S. Senate Committee on Commerce, Science and Transportation regarding his nomination to become administrator of FRA. His nomination remains before the committee as additional written questions were posed by committee members and submitted to nominees after the Sept. 22 hearing.

Amit Bose, who served as deputy administrator for the Federal Railroad Administration (FRA) during the Obama administration, was appointed to the same post last week by President Biden.

Amit Bose, new FRA deputy administrator, served as chairman for the Coalition for the Northeast Corridor.

Bose has years of experience serving in the public sector including as FRA deputy administrator, FRA chief counsel, USDOT associate general counsel and USDOT deputy assistant secretary for governmental affairs. While in the Obama administration, Bose worked on High-Speed Intercity Passenger Rail grants for projects on the Northeast Corridor and has a longtime association with the Corridor.

In addition to living along the corridor in West Windsor, N.J., and working for New Jersey Transit, Bose helped establish and later served on the Northeast Corridor Commission. He also participated in structuring the commission’s cost allocation policy, helped the U.S. Department of Transportation (USDOT) deliver a $2.5 billion Railroad Rehabilitation and Infrastructure Financing (RRIF) loan to Amtrak for its next generation of Acela rail cars, and worked on the environmental review of a number of projects.

“Amit Bose will be a great addition to the Federal Railroad Administration. His extensive experience in transportation policy, law and management will be an asset to the Biden Administration,” Coscia said. “Mr. Bose understands the importance of investing in infrastructure to support economic recovery and keeping America’s railroad system reliable and safe. We look forward to working with Secretary designee Pete Buttigieg, Deputy Secretary designee Polly Trottenberg and Mr. Bose to improve and expand passenger rail service across the country.”

Before his return to FRA, Bose served as vice president for HNTB Corporation and as board chairman for the Coalition for the Northeast Corridor.