On February 28, 2018, Ron Batory was sworn in as Administrator of the Federal Railroad Administration. Representing SMART General President Joe Sellers is Steve Dodd, director of government affairs, who is pictured with Ron Batory.

Batory has more than 45 years of rail industry experience and most recently served as president and chief operating officer of Conrail. Batory joined the company in 1998 as vice president-operations and was appointed COO in 2004. He retired from Conrail last year.

Before that, he was president of the Belt Railway Co. of Chicago. Batory also spent more than 20 years working for both 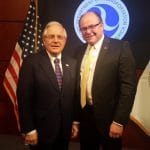 eastern and western Class Is, in addition to assisting a court-appointed trustee’s oversight of a regional railroad bankruptcy.

According to GP Sellers, “We are pleased to have Ron Batory as the administrator of the Federal Railroad Administration (FRA).”  He added that, “Ron Batory is knowledgeable and experienced in the railroad industry. We look forward to collaborating with him on PTC and other safety initiatives.”

After months of having his nomination on hold in the U.S. Senate, Ronald L. Batory was confirmed Tuesday evening as administrator of the Federal Railroad Administration by unanimous voice vote.

Batory’s ascension to the position came after U.S. Sen. Chuck Schumer, the Senate minority leader, removed a hold he had placed on the nomination.

The hold on Batory’s nomination had been an attempt by the Democratic senator to work out federal funding for the multibillion-dollar Gateway Tunnel project between his home state of New York and New Jersey.

Batory, former COO and president of Conrail, was nominated in July to lead the FRA by President Donald Trump. As the delay on his confirmation continued, Batory began working in November as a special assistant to federal Department of Transportation Secretary Elaine Chao, advising on rail matters.

“Ron Batory is a veteran railroader who knows the industry,” SMART TD National Legislative Director John Risch said. “We look forward to working with him at FRA.”

While Batory’s confirmation remained in political limbo, the FRA was being described as “rudderless” in some media reports.

Deputy Administrator Heath Hall, who had been leading the agency, resigned mere days before Batory’s confirmation after allegations surfaced in the media that Hall was working a second job.

Hall had been on a leave of absence from the agency since late January, and Juan D. Reyes III had been overseeing the FRA.

In addition to Batory’s confirmation, Raymond Martinez was confirmed by the Senate as administrator of the Federal Motor Carrier Safety Administration.